I went to a boot fair today. Amongst the finds was Pokémon Mystery Dungeon Blue Rescue Team for the Nintendo DS, and I picked up some knock-off multi-cart containing a handful of weird looking Pokémon games including what appears to be some kind of Pokémon Green translation. I doubt any of them support saving.
My brother scooped up a boatload of Pokémon Cards, and I managed to get a hold of a DVD of Pokémon The First Movie. I can't wait to talk about that, but that's going to be near the end of the first season, wherever the movie best fits in with the rest of the series.
But what does this have to do with the Pokémon cartoon, or more specifically, Challenge of the Samurai?
Nothing, so let's get on with it!
Oh yeah, it's Metapod by the way! 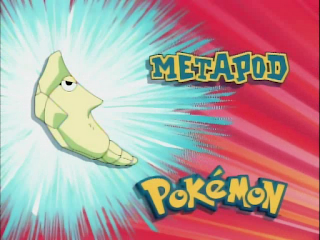 Ash, Misty, Pikachu and Samurai are running from the steadily approaching Beedrill horde. Surely all their yelling is just going to annoy the Beedrill more?
They hide in a bush and watch the Beedrill swarm go by, but they accidentally stumble upon a hive of Kakuna. (Protip: Kakuna evolve into Beedrill.)
Ash's Metapod is sitting amongst the Kakuna, no doubt one of the Beedrill abducted Ash's Metapod believing it to be a Kakuna.
Ash's shouting forces the Kaukna to split open, hatching to reveal Beedrill.
Once again, the group are forced to run from a swarm of Beedrill.
With all this running around, you'd think this were a Doctor Who episode. 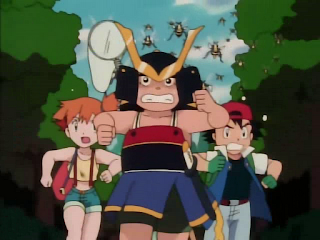 Ash, Misty, Pikachu and Samurai hole up in Samurai's cabin.
Once inside, Samurai belittles Ash for failing to capture Weedle. He also says that Ash is worse than a novice, because he left his own Metapod behind.
Samurai tells the story of how he was trounced by all three trainers from Pallet (which tells us that there are two trainers the series hasn't revealed to us yet). He mentions that he was waiting for the day when he could battle the fourth trainer from Pallet, and potentially beat them.
He says that Ash doesn't even compare to the other trainers, which is really rude of him.
Hold on, tangent. Couldn't Ash have just pointed his Pokéball towards Metapod and commanded it to return to the Pokéball?
Anyway, it's morning. Ash is sneaking up on the Beedrill nest to recover his Metapod.
Meowth stands on his head. Team Rocket!
Team Rocket recite their motto....yay? Ash interrupts, "Not again! Not now!", which irritates Jessie significantly.
"Never interrupt the Rocket motto!"
"But the Beedrill---"

The fireworks at the end of Team Rocket's motto were an unnecessary yet beautiful touch. Too bad they awoke the Beedrill from their sleep.
Ash makes a run for Metapod, thinking that if he can make it past the Beedrill they might dive-bomb Team Rocket instead.
Team Rocket are defeated by the Beedrill horde, allowing Ash to recover Metapod from the nest. He asks Metapod to return to the Pokéball, but it refuses to.
They are chased by a lone Beedrill, causing Ash to run. However, he trips up and accidentally drops Metapod, which rolls across the grass.
Ash's apologies and pure heart causes Metapod's eyes to swell up with tears. So... beautiful...
The Beedrill swoops to attack Ash, but Metapod launches itself off the ground. BAM! Metapod takes the hit, causing one of Beedrill's stings to be completely destroyed. However, it also punctures Metapod's shell.
Metapod then evolves into Butterfree. Butterfree uses its sleep powder attack on the Beedrill swarm, causing them all to fall asleep. Why Ash doesn't catch one here and now, I don't know. 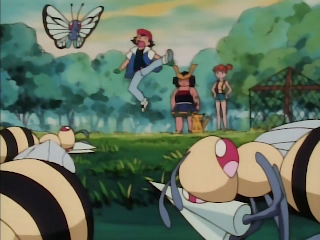 Ash celebrates his victory by jumping abnormally high.
Samurai is impressed with Ash's ability to control his Butterfree so well, even right after its evolution. Ash, Misty and Pikachu part with Samurai, and head for Pewter City.
Finally, maybe we'll start following the game again.
Narrator, what do you think?

"With Team Rocket thwarted for now, Ash and his friends leave the Viridian Forest and set their sights on Pewter City."
Wait, that's it? No nuggets of wisdom?

...gasp! There's still something else left in the episode? 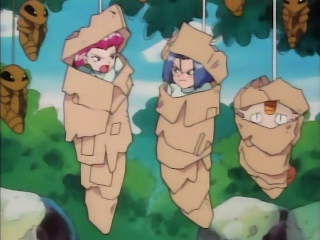 Oh  nevermind, it's just Team Rocket being idiots again.
Pay no attention to them.
Posted by Unknown at 14:08