This episode's recap goes all the way back to the beginning. It tells us about Ash, Pikachu, Pokémon Training and his journey up until this point. It's quite an in-depth recap, covering everything of merit from the first three episodes. It also goes to show how little story we've had so far. 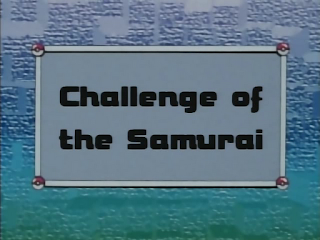 Just thinking about it, I probably won't go into much detail about this episode. It's one of those episodes that is blatantly plot filler. It has nothing to do with the games. Still, we've got to keep it fair, what have you got in store for us?

Misty screams because she's seen another bug, specifically a Weedle. Ash attempts to capture it by sending out Pidgeotto to weaken it. As Ash is doing his thing and actually being a talented trainer for once, Misty decides she's had enough and goes walking through the forest on her own. This can't end well.
A Samurai jumps out from the bushes, with a sharp sword he probably shouldn't be allowed to carry, inquiring as to whether Misty is the Pokémon trainer from Pallet Town.
Misty informs him that he is mistaken, and the Samurai heads off in the opposite direction. Misty soon realizes that the Pokémon trainer the Samurai is referring to must be Ash.
Ash weakens Weedle, and is about to capture it, but the Samurai turns up and makes himself a nuisance. The Samurai demands a Pokémon battle with Ash.
Oh Ash is mad now. The Samurai just got in the way of Weedle's capture, which managed to escape. Ash withdraws Pidgeotto from battle, and then turns to face the Samurai. He immediately releases Pidgeotto back into battle, where it lies on the floor in a tired state. Whoops, should have let your Pokémon rest, Ash.
The Samurai releases Pinsir. Ash orders Pidgeotto to perform a sand attack. This attack has no effect on a Pinsir, cartoon logic of course. Pinsir tackles Pidgeotto, which knocks it out in one go. Ash then chooses Metapod, which is unlikely to be able to protect itself.
Ash orders Metapod to harden, which it does. In fact, it becomes so hard, that it shatters the spikes on Pinsir's claws. 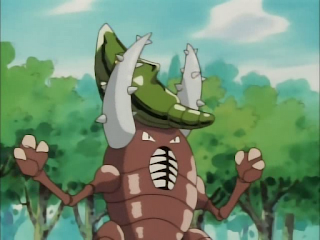 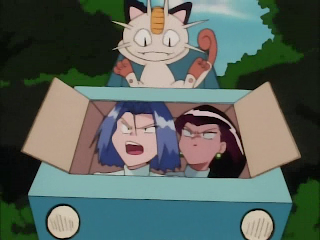 We have a cut-away to Team Rocket duo Jessie and James, who are traipsing through the forest inside a cardboard box shaped like tank. Meowth is laying on top of the box, doing nothing at all. It has begun. While Team Rocket weren't exactly sinister in the last episode, they at least escaped with sufficient tact and they still had some great retorts up their sleeves. But now? They've become a joke.
I was really upset about this in my youth, and I still am. Team Rocket aren't sinister anymore. They're just another punch-line.
They're hiding in a cardboard tank to protect themselves from wild Beedrill. Sure, it has a practical use but it's still a stupid concept.
A swarm of Beedrill approaches Ash and Samurai, so the battle is postponed. Thank gosh for that. I thought we'd be hardening forever.
A Beedrill swoops down and abducts Ash's Metapod! Another Beedrill swoops down, but Pikachu hits it with a thunder shock. Too bad Ash is in the vicinity of Pikachu's electrical discharge.
Misty tells Ash he has to leg it.
But... but Metapod! 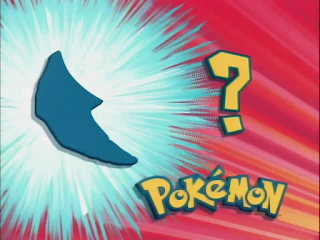