Going through the Pokémon series again is fun for me. I like seeing all my favourite characters getting introduced, and watching them grow as they go on their Pokémon adventures.There's something relaxing about kicking down with something you used to know and love, and re-visiting it all over again.

So if you don't mind, I'm going to continue!


Deep in the Viridian Forest, Ash Ketchum strikes Caterpie with a Pokéball. It is captured inside of the ball. It wriggles... and wriggles... before it finally...
just...
stops. 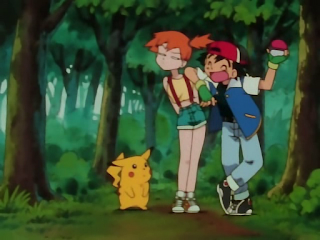 Ash is a wash with joy. He's caught his first ever Pokémon, and he's over the moon about it. Even though it's a Caterpie. And he just threw a Pokéball at it without weakening it. Really, he should just be happy he was lucky enough that he caught the Caterpie first time.

Either that or he held UP + A. He did, didn't he! Cheater!
(They used to say, back in the day, that holding UP + A when you throw a Pokéball would make it always catch a Pokémon, even if that Pokémon is a Mewtwo with full health. It's a lie, but it was a myth a lot of kids believed back in the day. UP + A never did work, it was just an urban myth, and nothing more. I still find myself doing it though whenever I try to catch a Pokémon.) 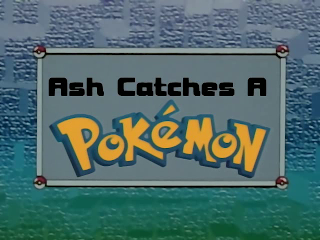 So this episode deals almost entirely with the subject of catching Pokémon, and throws Ash into his first proper battle with Jessie and James, lackeys of Team Rocket. It's more like a character building exercise than anything else, but it has its good moments amongst the poor.

Ash is parading off his first captured Pokémon, but Misty is not fond of bugs at all. Even inside the Pokéball, bugs get Misty "all bugged out". Ash releases Caterpie, causing Misty to run off scared and hide behind a tree. Ash asks Caterpie to climb up onto his shoulder. Caterpie is about to comply, but sees Misty hiding behind the tree. Caterpie is now clearly infatuated with her, and dashes over there to bother her some more.
Caterpie starts rubbing his head up and down Misty's leg, which she doesn't like at all.
Pikachu tries to console Caterpie after Misty's verbal abuse, but it isn't any use. Misty then takes Pikachu, carries him in her arms, and says, "I know, you can be friends with that horrible bug, and I can be friends with Pikachu."
One of these days, Misty will come to terms with her fear of bugs.

Nice to see they're getting along well with each-other. Although when I was a kid, the playground was full of much worse language than this.
Misty reveals that the three things she finds most disgusting are:
So I guess she's too scared to go shopping for vegetables at Walmart.
Ash says that the only thing he finds disgusting is the way Misty is hurting Caterpie's feelings. Which is true, that is disgusting and she should stop it. 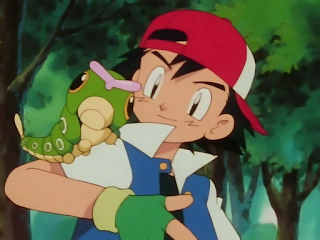 Caterpie climbs up onto Ash's shoulder. See? Nothing to be afraid of. It's cute, in a weird kind of way.
Ash threatens to go on without Misty, which she doesn't disprove of at all. Pikachu bursts out of her hands and follows Ash on foot. Now Misty's not in a very good mood.
Shortly afterwards, she continues to follow Ash, trying her hardest not to be seen.
"What are you following us for?"
"My-my bike. I'm holding you responsible for my bike."

Excuses, excuses. Just admit it, you like hanging out with Ash, we all do. That's why we sit down every Saturday morning and watch Pokémon.
So it's night-time now, and Ash is trying to get to sleep. He mentions this fact, only to be told off by Misty for talking. She's also trying to get to sleep, scrounging off the heat of Ash's campfire.
Caterpie looks up into the night sky, and sees the stars.
We get a nice sequence where Pikachu and Caterpie are talking amongst themselves, and we don't know what they're saying. I like this bit because you have to interpret it as best you can without subtitles or any clues as to what is being said.
Caterpie sees a Butterfree floating in the sky. For those who don't know, Butterfree is the third evolutional state of Caterpie. Caterpie feels that he wants to become a Butterfree. He and Pikachu bond together that night, and form a potent friendship. 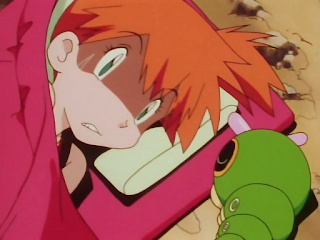 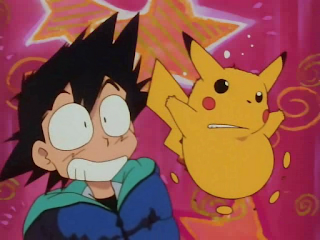 "Misty, you're horrible! Caterpie means you no harm! Why it likes you, I'll never know!"
No truer words have been spoken.
Gasp! A wild Pidgeotto!
Ash throws a Pokéball at Pidgeotto, who brushes it aside with its wing.
Ash should really learn that he has to weaken wild Pokémon, and that his capture of Caterpie was a fluke.
Misty tells him this, though in words that makes it sound like she's picking on Caterpie, which sends Ash into a frenzy. This is also the best part of the episode.

"Now, if you could kindly keep your big--" 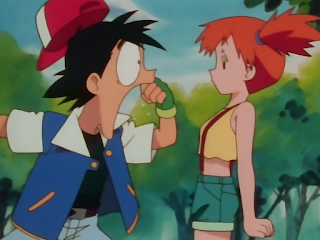 "--MOUTH shut, you'll see how it's done!"
What's with the art here, it's so ridiculous. It's also really funny, though, I imagine the joke wasn't too different in the Japanese version of the cartoon.

Now, Ash, show us what you've learned about Type Advantages! Yes, do not send out Caterpie--
"Go, Caterpie!"
What an idiot. What a colossal idiot. Oh well, nice knowing you Caterpie. 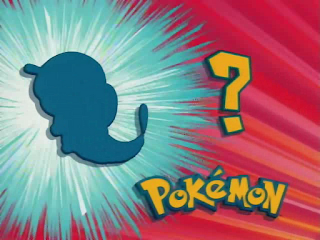