So who's that Pokémon, sitting there? It's Koffing. We're about to get introduced to him, hold on to your seats. 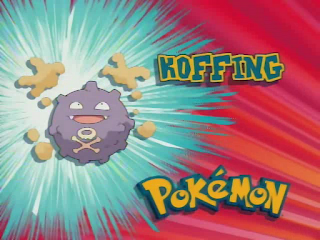 Misty confronts Ash at the front desk of the Viridian City PokéCenter. There's nobody else around, so this could get rather bloody.
"What happened to your bike?"
"You happened to my bike!"
As they argue and argue, Ash explains that he borrowed it to save Pikachu, and that there's nothing he can do to help Pikachu now. It looks serious, and he doesn't know if Pikachu's going to make it. He plays the emotional card. He's sly like that. 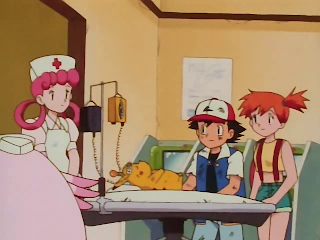 Pikachu is hurried out of A&E by Nurse Joy and the Chansey doctors. Nurse Joy says that Pikachu should be fine, and that Ash had gotten Pikachu to the PokéCenter in enough time. Pikachu should recover.
Over the PA system, Officer Jenny bellows loudly. Something is amiss! The Viridian City Radar System (another invention of the cartoon series) has detected an aircraft belonging to a group of Pokémon thieves. (Well shoot it down then and stop wasting time blabber-mouthing on the PA.)
Team Rocket admire themselves for a short moment, and in one of the shots, Jessie doesn't appear to be wearing lipstick. This animation goof is corrected in the next shot where she appears. 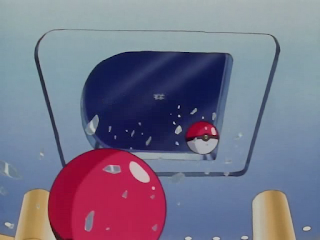 Team Rocket are right above the PokéCenter, and about to strike down upon it with a considerable amount of force.
They throw their Poké Balls through the decorative glass ceiling in the PokéCenter. What a waste of good glass, and those Poké Balls have got to be quite heavy. What if the Poké Balls bounced off of the ceiling and didn't break through the glass?
That would have been so embarrassing for them.
The Poké Balls land and they release Ekans and Koffing. Koffing fills the room with smoke, which allows Team Rocket to slip in mostly unnoticed. They reveal themselves to Ash, Misty and Nurse Joy.
Team Rocket recite their motto for the first time in the series, but most certainly not the last time.

"Prepare for trouble!"
"Make it double!"
"To protect the world from devastation!"
"To unite all peoples within our nation!"
"To denounce the evils of truth and love!"
"To extend our reach to the stars above!"
"Jessie!"
"James!"
"Team Rocket, blast off at the speed of light!"
"Surrender now, or prepare to fight!"
"Meowth! That's right!" 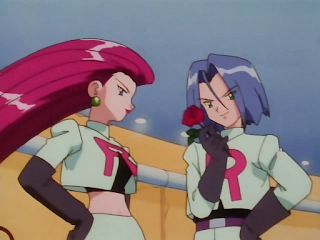 Quite polarizing, actually. For a bunch of villains, their motto doesn't appear particularly evil. Does this sound a little bit like a translation goof? Well, no. In the Japanese, Kojiro and Musashi's is very similar, the translation is actually pretty sound as far as 4Kids translations go.
So why do they speak like this?
It's got something to do with them being the "beautiful villains". In a lot of Japanese fiction, there is a villain or group of villains who are basically in love with themselves and their appearance. Although played down by Dic, this could be seen in Sailor Moon with the character of Malachite. Examples in popular video games could include Vega from Street Fighter, who wears a mask in order to maintain his beauty; he never allows his face to be damaged during a fight.
James and Jessie are designed to be the comic relief in each episode, which is something you expect from characters that love themselves. However, in their first appearance, they're really menacing and seem dangerous.
Anyway, I've ranted about this enough.

Ash isn't playing any of Team Rocket's games. He's not impressed with their behaviour, and tells them so. Jessie and James shrug it off. They're only interested in raiding the PokéCenter for its rare and unusual Pokémon. They couldn't care less about Ash and his "worthless little electric mouse"
James and Jessie attack Ash, Misty and Nurse Joy.
During their escape, the group don't realize that Jessie and James have sabotaged the power systems of the PokéCenter. Once the group are secured inside one of the rooms, away from Koffing and Ekans, the power completely drops out.
But there's nothing to worry about, the PokéCenter has its own "Pika Power". This is the stupidest thing I've ever seen. 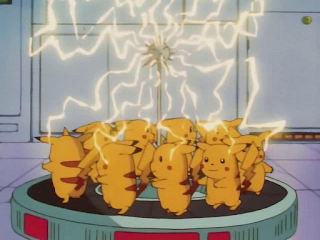 Couldn't think of anything else? A bunch of Electrodes, or Magnemites? No, it had to be a bunch of Pikachu, didn't it. I'm actually having to hold myself back from swearing right now, because this is so ridiculous that I find it frankly insulting to my intelligence, down at my absolute core.
Haven't they invented batteries!? Do they really keep a bunch of Pikachu especially for situations such as this one!?

The computers come back on, as do the lights. Nurse Joy activates an emergency PokéBall transfer system. This means that a mechanical claw has to pick the PokéBalls up and drop them down a designated chute. I'd have developed a less elaborate system, maybe that the balls are ejected from their seated position and roll down into the chute. But let's not talk about practicality in a cartoon where electric mice are the emergency electricity generator.
Sorry, that still bugs me.
Actually, hold on a gosh-darned second! Earlier on, Nurse Joy said, "It looks like a Pikachu." Ash's Pikachu doesn't look like a ruddy Pikachu, he is one! And you know what they look like because you've got ten of the little critters confined inside a generator giving you power whenever somebody trips the mains!
Koffing breaks into the room, and sends all of the PokéBalls flying onto the floor. Nurse Joy issues an order, that Ash and Misty should immediately begin picking up the PokéBalls and depositing them back in the chute.
Ash tries fighting with the injured Pokémon. The first PokéBall releases a Pidgey, that is scared by Ekans and flies away from the battle. Ash tries again, throwing down another PokéBall, which doesn't actually contain a Pokémon.
The third PokéBall doesn't fair any better, inside is a Rattata. Again, it is frightened of the Ekans and runs away. Misty decides to take things into her own hands, and this is the first time we see her as a Pokémon Trainer.
Oh, do note we still haven't heard her name yet. So at this point we're not supposed to know she's Misty, the Cerulean City gym leader. But like I said, if you've played the game, you know who she is. 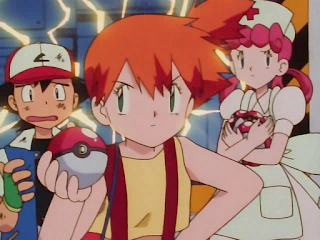 Some general quips are made about beauty, and Team Rocket manage to insult Misty. She recklessly releases Goldeen, which just flaps on the ground for a few seconds. The look on Jessie and James' faces is priceless, and I don't want to spoil it, so you'll have to watch through the episode again if you want to see it in all its glory.
Misty re-calls Goldeen, and gloats that she is merely warming up. She tells Ash to get out of there with Pikachu, while he still can. Ash makes a break for it, but is chased by Koffing and Ekans.
Ash is then stopped by his own stupid mistake. The stretcher collides with the ruined bicycle, and causes him to come to a halt.
This wakes Pikachu up. Pikachu shouts "Pika, Pika!" and a number of Pikachu appear out of seemingly nowhere. I count at least 32 of them when watching this sequence in slow motion. I thought the generator only had ten Pikachu inside it. Also, the generator was covered with glass, which was not damaged when Koffing entered earlier. So where did these Pikachu come from? 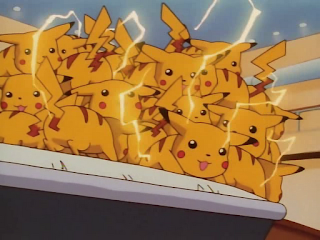 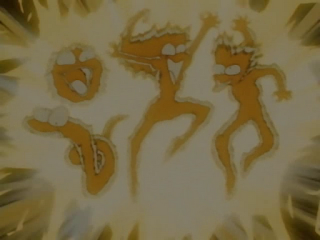 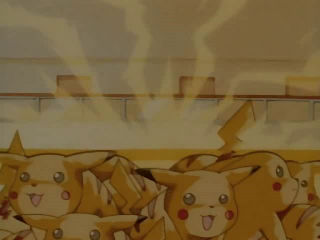 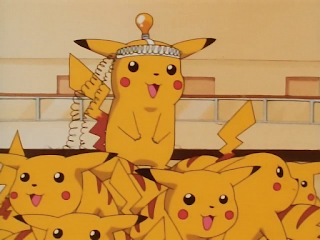 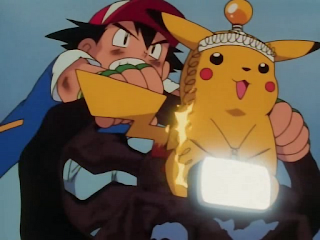 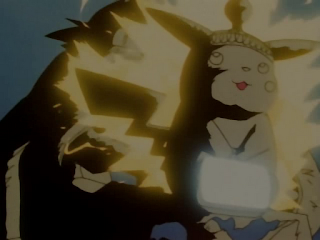 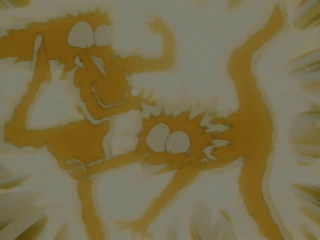 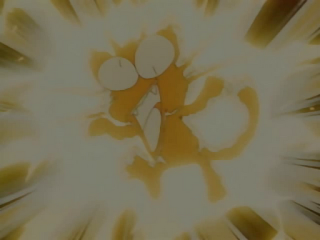 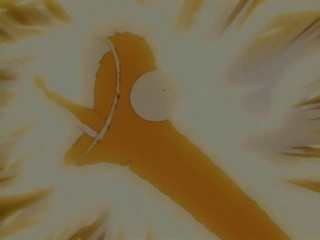 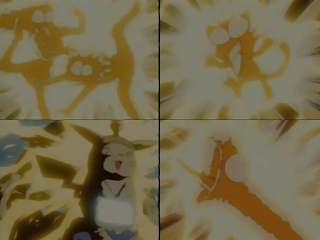 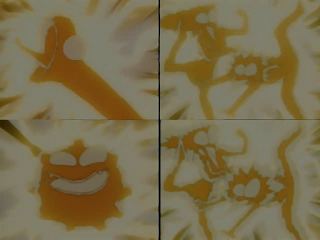 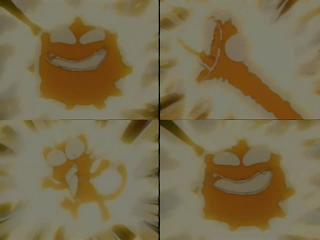 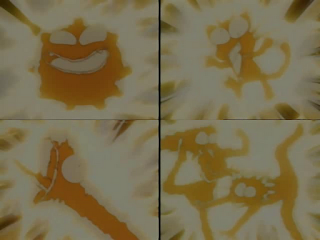 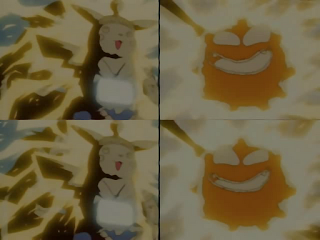 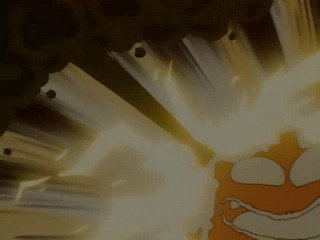 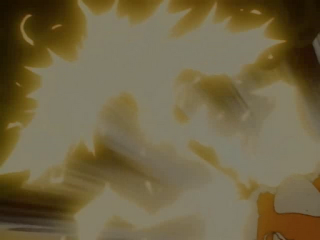 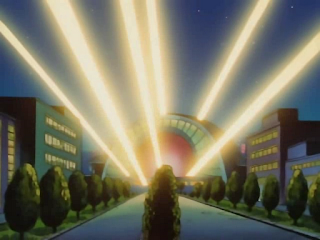 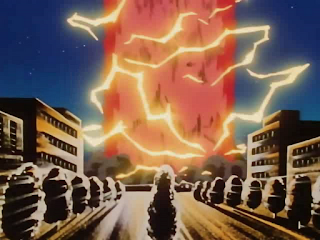 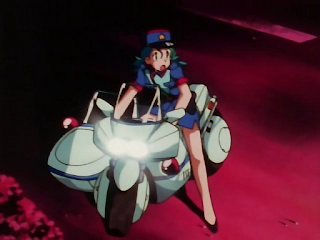 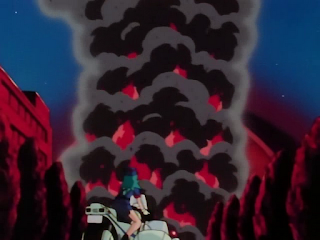 Wow, I wasn't expecting that.
So Ash now owes Misty one bicycle, and Nurse Joy one PokéCenter. These things aren't cheap, you know.
Team Rocket manage to escape, with the hot air balloon intact. They plan their next move. That Pikachu is rare, very powerful, and they're going to capture it to please their boss. Oh no, their hot air balloon just sprung a leak. Team Rocket go blasting off for the first time, but certainly not the last. 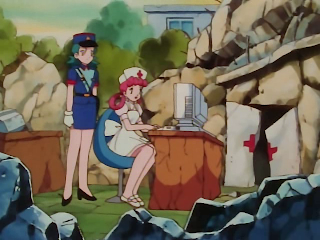 Also, Nurse Joy refers to the main cast as Ash and Misty, and this is the first time the audience is told. In the Japanese version of the cartoon, Misty tells Ash and Nurse Joy her name while they're in the PokéCenter. Knowing her name is Misty, anybody who had played the game and had not yet twigged who she was would finally know.
Ash and Misty are on their way to Pewter City, but they must first pass through the Viridian Forest.

Deep within the Viridian Forest, Ash and Misty happen upon the bug type Pokémon, Caterpie. Ash throws a Poké Ball, ready to strike and capture the small creature. And with that, take us out, Narrator! 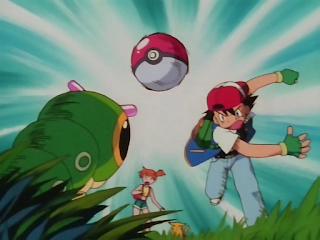 "Will Ash capture the Caterpie? What sinister plans are being concocted by Team Rocket? Will Misty ever get a new bicycle!? All the answers on the next Pokémon!"

YEAH! Who's pumped!? Uh-huh! Next time, "Ash Catches A Pokémon!"
Wait, that means we know for a fact he caught Caterpie, doesn't it.
Oh well.