So why do the Poké Balls have Japanese writing on them? Only in this shot, too. Weird. 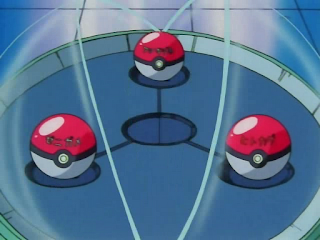 Ash has entered Professor Oak's lab and is ready to get his first Pokémon. He's thought about it long and hard, and he's going to pick Squirtle. 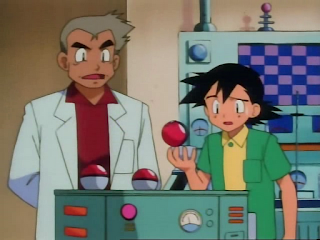 Unfortunately, somebody already took Squirtle. Who took Squirtle? We know Gary takes Charmander, so who takes Squirtle? Maybe we are actually told at some point, but I cannot actually remember. In the incredible comic-book adaptation Pokémon Adventures (which all Pokémon fans should immediately get a hold of and read) we're told that Squirtle was stolen from Professor Oak by "Blue" (or "Green" in the Viz translation), who I don't ever remember appearing in the animated series.
If they produced an animated series based on the Pokémon Adventures comic-book, it would be the greatest animated series ever produced, and the closest to the game. Satoshi Tajiri has said, "This is the comic that most resembles the world I was trying to convey."
Ash decides to take Bulbasaur, which has too already been taken by someone else. 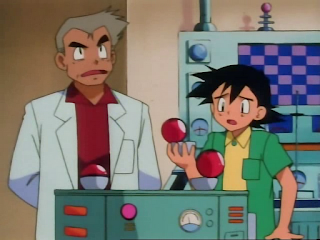 Oh, such terrible luck. Tell me though; why have the empty Poké Balls? Doesn't a Pokémon stay inside their Poké Ball most of the time? Are you telling me they do some kind of Poké Ball transfer? Explain it to me, Bill!
No problem, Ash is going to take Charmander after all. That's what I'd have gone with to begin with. But we know Gary's got that one. 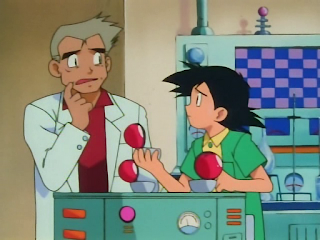 Ash is devastated! Maybe he shouldn't have stayed up until gone-past 11pm watching TV and pretending to be a Pokémon master. This is a huge wake-up call for him, he's been a really rude sport and he deserves to be knocked down a peg.
Professor Oak can't say no to Ash's pleas, and informs him that there is one Pokémon left, but there is a "problem" with it. What, is it dangerous? Sure. It can't be more dangerous than a fire breathing lizard.
In any case, Professor Oak reveals the fourth and final Poké Ball, containing: 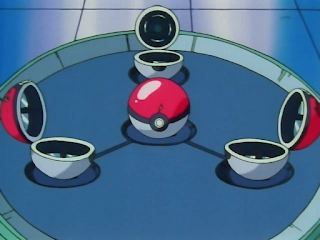 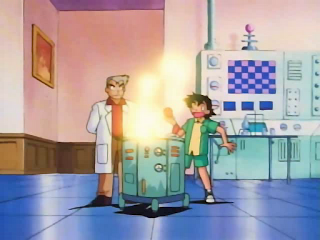 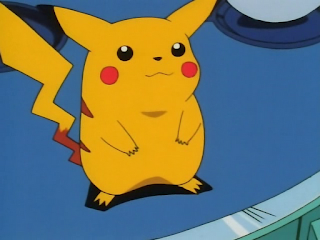 Pikachu. That horrible little thing. The thing that got me hooked on Pokémon. The hideously over-cute yellow mouse, oh Nintendo knew what they were doing. Look at it. LOOK AT IT. Isn't it adorable!?
I had to have everything Pikachu related. I needed to own everything with Pikachu's stupid face on it. Pikachu made me do it. Pikachu got me into Pokémon.
Here comes my favourite line in the entire episode. I know there's others, but this one cracks me up every time. 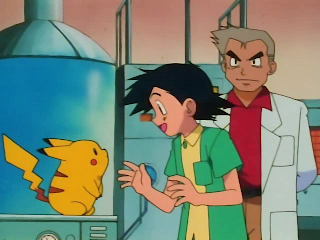 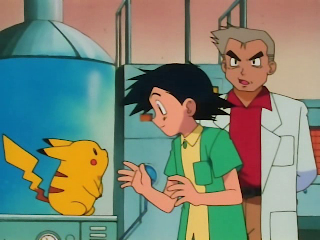 I just love that. He doesn't even change his expression. He just makes that retort with complete apathy towards Ash.
Professor Oak is knowingly allowing a young boy to touch a small mouse capable of outputting 1 billion volts. Where'd I get this number? Well, a lightning bolt can contain upwards of 1 billion volts of electricity, and the Pokémon Emerald Pokédex entry states that Pikachu can store and release electrical energy equivalent to a lightning bolt.
But, you know, it's fine to let a kid touch a mouse that potentially kill him a nanosecond. Don't even seem surprised or shocked about it. 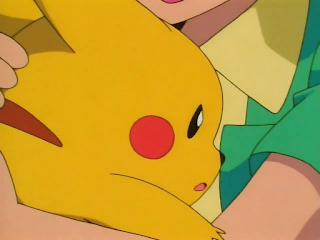 Pikachu doesn't like receiving hugs. Over time, he will come to accept Ash as his trainer. However, in the first couple of episodes, Pikachu can be a really heartless little troublemaker.
He apparently feels threatened, and proceeds to unleash electricity and harm a poor young boy. Samuel Oak seems fine about it. 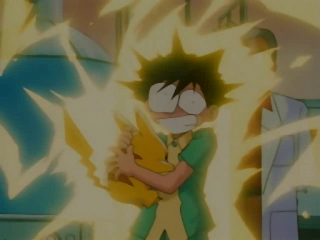 "It has an electrifying personality!" 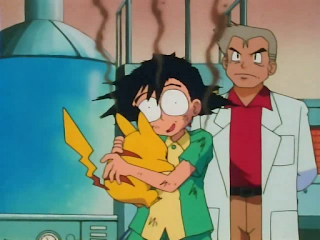 To its credit, the jokes still make me laugh. Although they're really bad, they make me smile, because I remember them. And I remember them being bad. And it's all flooding back to me. 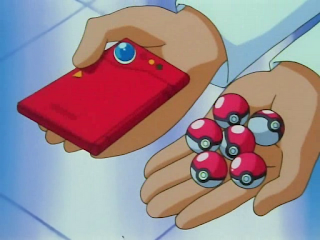 Professor Oak hands Ash his Pokédex and Poké Balls, for capturing Pokémon. Ash tries to pick them up, which Pikachu sees as the perfect opportunity to zap Professor Oak. 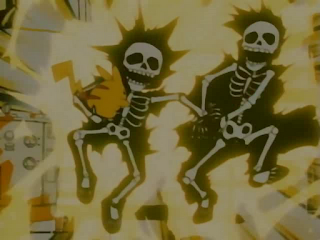 Isn't that a bit graphic for a children's cartoon? Seeing their skeletons? I remember when Sega censored Sonic the Hedgehog by removing an animation showing his skeleton when he gets electrocuted. I think this screen capture would make a great t-shirt.
So Ash has his new Pokémon and he's ready to set off on his Pokémon journey, but first... a few words from his mother, who has managed to get the PTA or Friends of Pallet Town or Alcoholic's Anonymous or whoever it is to show up and provide fake support for Ash. 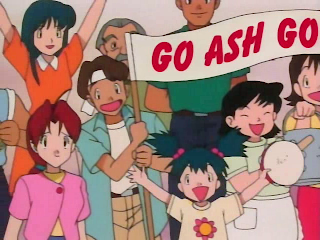 That banner edit is so poorly done. You can try a little harder there, 4Kids.
Delia has packed Ash a bag, containing his belongings, snacks, clean underwear, a pair of rubber gloves for his laundry and a clothes line. You know, she does the caring thing all mothers do before letting their ten year old son or daughter leave to go on an adventure in the complete wilderness and unsafe world outside. 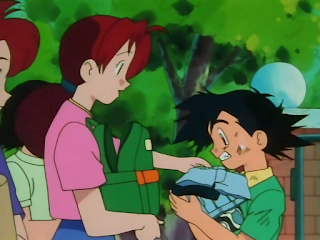 You've really got to laugh about it sometimes, the world of Pokémon is a completely messed up place. How in the blue blazes is it considered fine for a young child to wander off on their own with a couple of magical animals for company?
Magical animals that can; burn them alive, eat them, eat their dreams, steal their soul, drag them to the spirit world... There are Pokémon who revel in and enjoy eating the souls of children. So why do children go on Pokémon adventures?
The answer is because the world has gone completely crazy. I can't think of any other explanation.
Delia makes another rather valid point; why isn't Pikachu inside his Poké Ball? 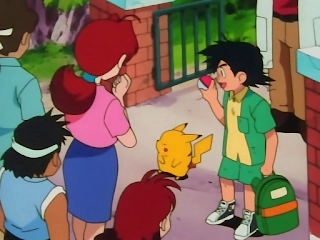 "Pikachu, get inside the ball now!"
Pikachu keeps knocking the ball away, with a small grunt of "Pi", "Ka" or "Chu", in order. Delia smiles and laughs, saying "Ah , you're playing catch! You're friends already."
Ash merely responds, "Sure." I love that line. The way he says that is just golden.

Delia describes Pikachu as "a little weird", which makes Pikachu very angry and attempts to murder the townsfolk. 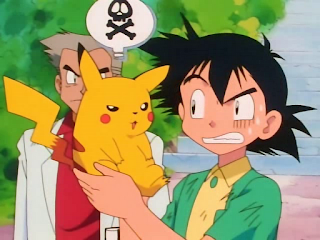 A storm is coming. 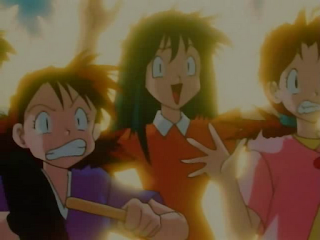 Nothing like a spot of good old fashioned electric torture. That will teach you to have opinions, Delia! 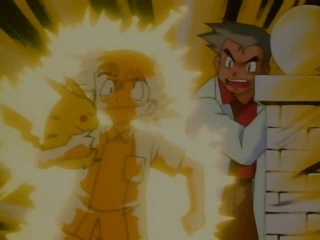 "Those rubber gloves your mother packed will sure come in handy."
"Whhhhhhyyyyyyhyhyhyhyhyyyyyyy.....?"
"Rubber blocks electricity!" 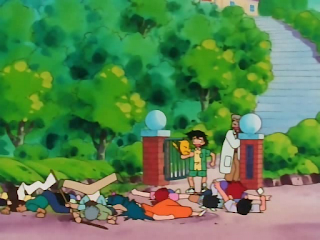 Ash observes the aftermath of Pikachu's murder spree. That blood is on his hands. 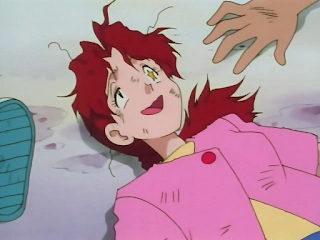 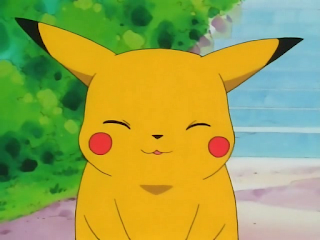