The first episode of Pokémon could well be where I began watching the series from. I have a vague memory of playing the game before this, but I honestly can't remember which one I did first.
My memory isn't perfect. In actual fact, my memory is full of so many holes that if you put it in the sea it would just sink to the bottom.
But, I will try to remember. Because I want to remember. 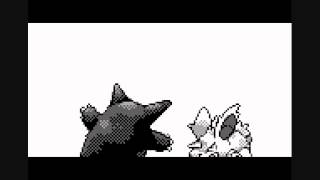 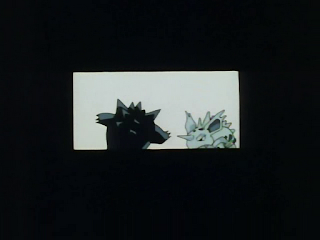 Yes, it is a primitive looking recreation, but the animation immediately transforms into the cartoon's actual style, as Nidorino lunges toward Gengar. This has more importance than you'd first think.
When Pokémon was in its planning stages, it was known as CapuMon, short for Capsule Monsters. During this stage, the iconic bout between Nidorino and Gengar had already become an staple of the series. The appearance of these Pokémon in the game battling each-other, and in the cartoon, can all be traced back to the early design stage. 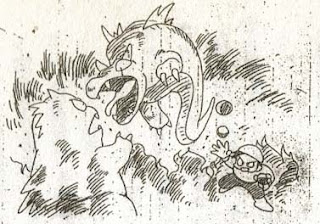 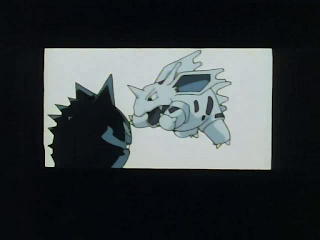 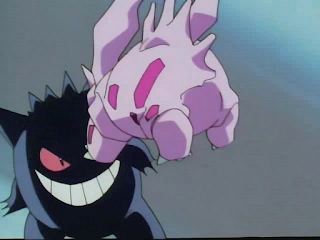 The transformation of this shot is absolutely brilliant. This iconic scene that was first designed as early as 1990 shows us how long Gengar (Phantom) and Nidorino have been creatures in the series, but also how they have evolved over years of constant redesign.
This gives me shivers... and it gives us the framing we sought after back then. We wanted to see Pokémon battling, just as they do within the games, and the series opens with this right off the bat, opening as the series had originally been planned to open, right since the very beginning. The music also evolves into a more orchestral and bad-ass form.
What we're watching is epic, and timeless. 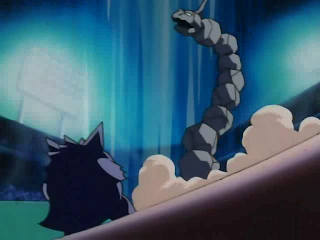 The show really doesn't linger on this battle for too long, but long enough to get you pumped up. In these sixty seconds, you've moved to the front edge of the sofa, crossed your legs and you're staring intently at the screen. In this opening minute, they've got you exactly where they want you. 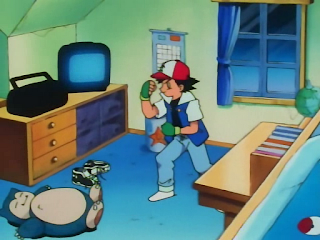 We are then introduced to Ash Ketchum. I don't think I thought much of him as a character back then and I certainly don't now. I believe that he gets what he deserves over the course of this episode, although we will go into the awful behaviour of Pikachu eventually. Over time, I guess my opinion changed, but that was mostly due to having Ash forced down our throats for every episode.
Ash has turned 10, and is allowed to get a beginner's Pokémon training license from Professor Oak, the town's leading authority on Pokémon.
Let me remind you that the town's leading authority on Pokémon cannot tell what the time is because his watch is broken, is unable to tell whether you're a boy or a girl, and only has four Pokémon in his posession (all of which are only Lvl. 5). 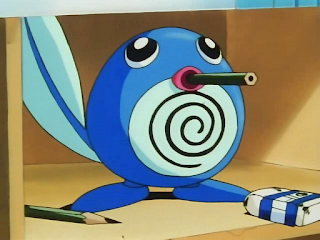 I like how much merchandise there is in the Pokémon world that is actually based on Pokémon. Their entire world seems to be controlled by and run by Pokémon. If we take the actual Pocket Monsters themselves to be the "animals" of the Pokémon world, that would be like us having nothing but television shows and movies and books dedicated to animals.

Yes we have those, but they're not everything we have. In the Pokémon world, everything is related to Pokémon. Everything has the design of a Pokémon.
I wouldn't be surprised if the objects in Ash's bedroom were all failed attempts at Pokémon merchandise. "Yeah, the Poliwag pencil sharpener and the Clefairy money bank didn't catch on as well as we thought they would." 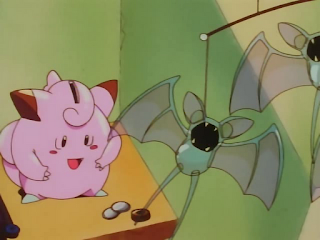 Gotta love the Zubat cradle. Ash is puportedly 10 years old, he's far too grown up for petty childish stuff like this.
Something has just struck me. These objects in Ash's bedroom are indeed perfect representations of the Pokémon that they are based on. Does this mean that Pokémon are all block-colour poorly shaded spherical shaped creatures? Or does this mean that some very talented manufacturer can perfectly recreate the shape and colour and likeness of a real-life animal to an eerie level of detail?
Or does it mean I'm looking too much into it? 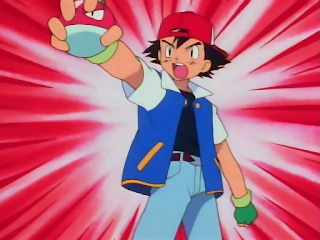 Ash fancies himself as a Pokémon master, despite having absolutely no experience or knowledge on the subject. I've got to admire his determination, because he's really serious about this. He wears his cap backwards because its the nineties and he looks like he hasn't washed his hair in days, but he's ready to become a Pokémon master, he says! 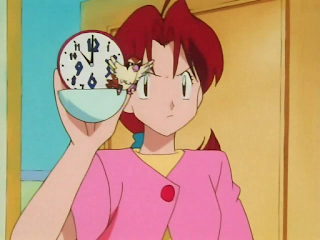 This is Delia Ketchum, Ash's mother. I don't see Ash's father ever mentioned, ever, at all. Delia points out to Ash how late it is, how he should be in bed, and that he's making way too much noise. All of which are vitally important points to make.
Ash is just too excited, you see. He can't sleep because he's too excited that he can finally get himself a "starter Pokémon" and a license from Professor Oak.
Did this whole scenario ever seem weird to you as a kid? It did to me. The whole getting a license to own Pokémon. Why could you get one only if you were old enough? Why 10 years old? How many Pokémon does Professor Oak own? Who else is authorized to give out Pokémon trainer licenses? 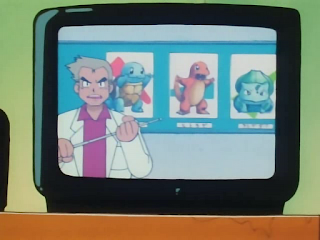 "Good evening, town of Pallet."
So the town has its own public access television channel?
Professor Oak tells viewers that they can have one of these three Pokémon. This leaves us (and Ash) deciding what Pokémon we want to take.
And now, the episode begins proper. 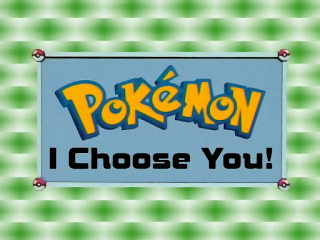