It's about time we re-visit Pokémon. Everyone else is right now so I'll do it too. 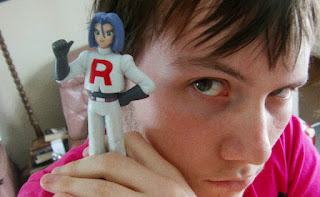 Welcome to the first post on "Pikachu Made Me Do It", a blog dedicated to my traipsing through old Pokémon media and getting all nostalgia'd. I'll be going through the television show once again, all the old and new games, sharing my thoughts on them now and how I felt as a kid when I played them many years ago.

I cannot promise that this blog will be devoid of swearing and crude jokes, but I will try my hardest to keep them to a minimum.
Now, let's begin with a look into the origin of Pokémon, and how I first came into contact with the phenomenon as a kid.

Well, if you lived in the United Kingdom, and longed for the weekends because they were your escape from school, then you probably got up early on a Saturday morning to watch SMTV. The voluptuous Cat Deely and the cheeky Ant & Dec adorned the television for a few hours; they showed cartoons, their own dumb comedy sketches and they ran a lot of competitions.


So every week, I'd wake up early with my brother, and we'd watch Pokémon on SMTV. I remember they even aired Pokémon on Christmas day one year, the episode about the Gengar and Haunters, it seemed rather strange to air that episode at that time.

So that's how I got into Pokémon. The cartoon started my love for the series. You may notice how I don't refer to the Pokémon series as "anime", but as "cartoon". This is because I don't want to alienate my audience and back then I merely saw it as a cartoon and nothing more.
The love for the cartoon became love for the games, and then love for the trading card game. If it was Pokémon, then I probably had it.
Except for the electronic Pokédex. I never had one of those, ever.

So a good place to start going through Pokémon again would be to start at the start. To begin at the very beginning, the animated series, as it was aired in my country. As I go through, I will talk about the episodes that didn't air over here and the reasons why, but this is mostly about reliving my childhood.


For extra Pokémon reading and watching, The Completionist just ran a feature on Pokémon Red, Blue and Yellow. Somecallmejohnny just ran a "Month of Pokémon". For Pokémon trivia from someone who never quite grew up (but I love him for it) check out JWittz. For mild mannered japes, check out the GameGrumps playing through Pokémon Emerald.
If you get bored of me, you can go there. But you won't get bored of me, will you?
Posted by Unknown at 10:45