I've been playing Pokémon Ranger recently, and it's pretty much crippled the rest of my day because it's just so addictive. Between that and making the kitchen and living room spic-and-span, I've had very little time to myself. Now I finally do, let's get back to Pokémon.

Oh by the way, it's Caterpie. 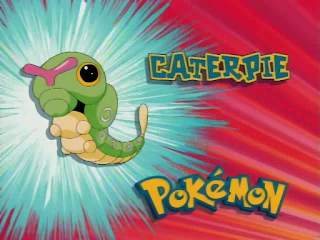 Where we left off last, Ash released Caterpie in a battle against Pidgeotto. For the "Ultimate Pokémon Master", he should know better than to use bug Pokémon in a battle between a Flying or Bird type Pokémon.
It's no use. As much as Caterpie tries to fight back against Pidgeotto, he's merely like a bug scurrying away from a hungry bird. Wait, that's exactly what he is.
Ash withdraws Caterpie from battle before it's too late, and feels really dumb for not knowing about type advantages. He immediately calls to Pikachu, and Pikachu performs a thunder shock move on Pidgeotto. Ash throws a Pokéball at Pidgeotto, this time having weakened it.
Ash screams, "Yes! We've got Pidgeotto!"
Pikachu seems pretty happy too. 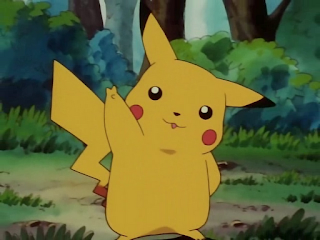 Ash starts gloating to Misty, who immediately puts him back in his place. I can hear a slap sound effect here, and you know what, this is another place where Ash is slapped by Misty in the Japanese version.
Why the sound effect is still there, 4Kids only knows.
While Ash and Misty have another falling out, their argument is interrupted by the laugh of Team Rocket duo, James and Jessie.
They recite their motto, which I'm not going to do every time, only when they alter it to fit a particular episode, which isn't often.
They reveal that they're after Ash's Pikachu, because its powers exceed it's usual evolutionary capacity. Because they're after rare and valuable Pokémon, and they are aware that there is an exceptionally powerful Pikachu floating around out there, they're dedicated to its capture.
They send out their Pokémon, Koffing and Ekans, to battle Ash and his Pikachu. Ash complains about how a 2-on-1 battle isn't fair. Jessie spouts off some old-fashioned saying about Love and War, to which Ash replies:
"That saying's rotten, and so are you!"
James responds with the best retaliation EVER:
"Of course we are. We're the bad guys."
I think I'm in love with him. 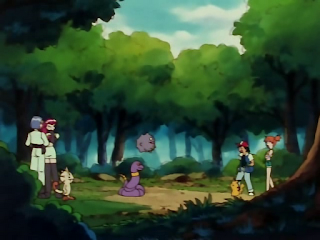 Koffing uses its Sludge attack, which blinds Pikachu. Ash hands Pikachu to Misty, insisting that no matter what underhanded tactics they use, Team Rocket must never get a hold of Pikachu. Misty is moved by Ash's love for his Pokémon, but is concerned that Ash cannot win the battle.
Ash sends out his recently captured Pidgeotto, which has absolutely no trouble dodging Team Rocket's assault. Its agility is far greater than that of their Pokémon, and the battle appears to be rather even as neither team makes any progress.
Unfortunately, Pidgeotto is attacked from both sides by Ekans and Koffing. This double tackle weakens it significantly and Ash is forced to return Pidgeotto to the Pokéball. What now?
Pikachu insists that he wants to battle, but there's no way he can in his condition. Ash makes the call. It's do or die. It's time.
Ash releases Caterpie. Team Rocket burst out in laughter, as you probably would, given the situation. 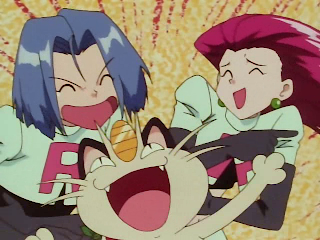 Alright guys, it isn't that funny.
Caterpie's frightened, but Ash orders Caterpie to perform the string shot attack.
This manages to incapacitate both Koffing and Ekans.
Remember, only on the cartoon show, kids. It doesn't work in the games.
Caterpie even brings Meowth to a halt, too. 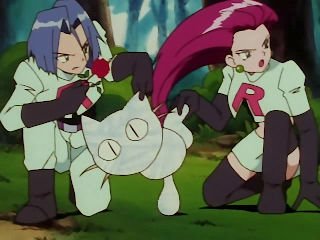 Team Rocket make their escape, they know when they've been beaten. Although they clearly haven't, because the string shot attack doesn't work this way. Only in the cartoon, where some of the rules are tossed out of the window, whenever it's convenient.
Ash manages to guilt Misty into giving Caterpie a pat on the head for a job well done. Just as Misty goes to do so, Caterpie starts showering itself in silk. What in the blazes?
Caterpie evolves into Metapod. Who knew Ash caught his wild Caterpie at Level 6 with two experience points to the next level. What I'm trying to say is that you can't evolve that quickly, end of.
Don't worry, the cartoon acknowledges that they're breaking the rules. Dexter outright confirms this.
"This specimen reached this stage faster than any other Pokémon on record."
Like we said, we're breaking the rules here, kids. Live with it. It's anime. It doesn't make sense. 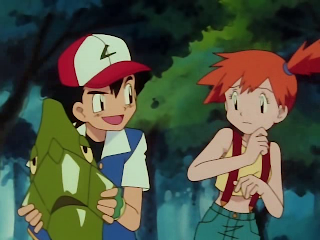 Misty demands that Ash gets them out of the forest immediately - but why would he do that? There's so many more bug Pokémon to catch! At least they're getting along better now. Hopefully they'll do something about the gunk on Pikachu's eyes.
I'm slipping here. Narrator, help me out buddy.

"The future looks bright for our heroes now, but up ahead the Viridian Forest is deeper and darker than they know, and a dangerous new challenge is waiting!"
New as in, "not part of the game or in any way related to it", right?
Next time, "Challenge of the Samurai".
Yeah, weren't no samurai in Pokémon Red or Pokémon Blue, was there?