So Ash and Pikachu set off on their Pokémon journey, and... oh this is taking too long, isn't it.
Fast mode, activated. 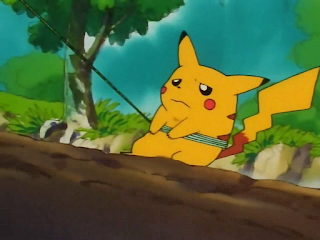 Pikachu is being a nuisance towards Ash. You see, Pikachu doesn't want to be trained, confined inside a Poké Ball or hugged. Ash tries his hardest to gain Pikachu's favour, even going as far as to ditch the rubber gloves, the clothesline (which he fashioned into a pet lead) and agreeing never again to confine Pikachu inside a Poké Ball.
And Pikachu still doesn't feel like co-operating. This is what life is like, folks. You give all the love you have, and somebody just takes it from you, leaving you with nothing.
You're left in a terrible and depressed state.
Or maybe that's just me.
It's just me isn't it. 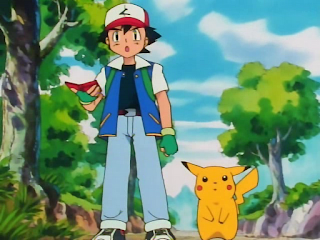 Ash and Pikachu discover a wild Pidgey, and Ash decides that this is his ideal first catch. I normally punt for a Pidgey when starting off on Pokémon Red or Pokémon Blue. They are common, rather easy to catch, and can actually grow into a strong Elite Four worthy fighter.
Pikachu doesn't feel like co-operating with Ash, and would rather climb up a nearby tree and yawn. Ash decides that he can capture a Pidgey all by himself. So he-- 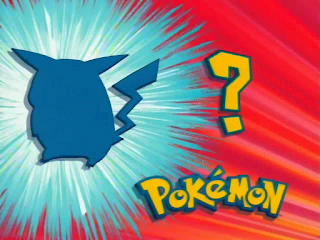 Right, I need to explain what this is for those who actually don't know. Before and after the advertisement break in a Pokémon episode, this small segue appears. A Pokémon is shown as a silhouette, and the question, "Who's that Pokémon!?" is asked by the cartoon voice cast.
Quite often, the answer is obvious because of the episode itself and the Pokémon we've been shown so far. If a single person couldn't work out that the above Pokémon is a Pikachu, given the amount of screen-time that yellow rodent has had so far, then they're probably not smart enough to fully enjoy the show.
I don't remember SMTV showing these back in the day. Maybe they did, but I honestly only remember the "Who's That Pokémon!?" sections from when I asked my nextdoor neighbours to video-tape the Orange Islands series off their Sky TV, and when watching through my favourite Pokémon episode about three years ago on YouTube.
(I don't want to spoil which episode is my favourite until we get there, but no others even come close. I can't wait until we're there but it'll take a while.)
Anyway, it's Pikachu. Let's move on. 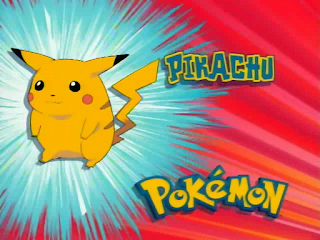 Yep, can't see anybody getting that wrong...
So, Ash decides he can catch Pidgey by himself.
"Enjoy your last moment of freedom, Pidgey, because you're mine!"
Ash throws a Poké Ball towards Pidgey, but he obviously forgot to hold Up + A, because Pidgey manages to escape the Poké Ball. The Poké Ball returns to Ash, but in the games, they do not return to you if they fail to work.
In an attempt to weaken the Pokémon without the help of Pikachu (who is busy laughing at Ash's misfortune), Ash creeps up on Pidgey with his coat, ready to pounce on the bird. This excellent visual gag is rounded off with a superb line. 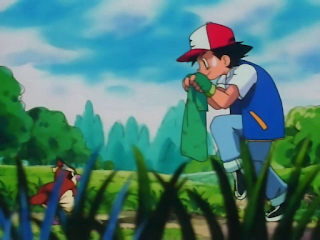 This fails too, as Pidgey uses its gust attack on Ash. Once again, Pikachu laughs at Ash and behaves like a menace a bit more. As Ash looks back towards his backpack, he notices that a Rattatta has stolen from him.
His Pokédex tells him that "Rattatta steal from stupid travellers". Once again, Pikachu revels in Ash's misfortune. I'm really starting to feel sorry for Ash, he should have begged his mother to buy him Pokémon Blue or Pokémon Red instead of Pokémon Yellow.
Ash won't be defeated, he's ready to catch Pidgey for real this time. He takes a small rock and with an acute sense of accuracy he manages to strike Pidgey on the back of the head.
But it isn't Pidgey he just hit. Ash just pissed off a Spearow. Spearow are violent bird Pokémon with a history of attacking humans. 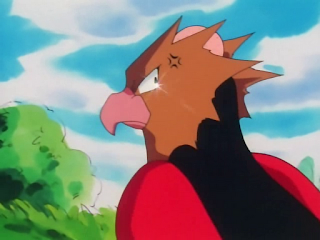 Fearow immediately starts attacking Ash. It swoops by, and the animation then does something really interesting. We get a nice POV from Spearow's eyes, in monochrome. It is very nice to look at, though out of place alongside the rest of the series animation.
Spearow decides to attack Pikachu. Ash shows concern, but the Pokédex reveals that wild Pokémon are jealous of trained Pokémon. I don't ever remember this coming up in any of the comic book adaptations, or the video games themselves, or even anywhere else in the cartoon series.
Either way, Spearow is paramount that Pikachu must be destroyed.
Pikachu unleashes his thunder-shock attack, and defeats the Spearow. Being the idiot that he is, Ash doesn't catch the Spearow while he has the chance.
The downed Pokémon alerts the other nearby Spearow. The Spearow start to chase Ash and Pikachu through Route 1, which is shown to contain wild Sandshrew and Mankey. Any Pokémon fanatic doesn't need to be told that this route is not home to wild Sandshrew or Mankey in any of the games.
Ash shouts "Leave him alone, Spearows!". The plural of any Pokémon species is the same as the singular, so Ash is actually making a goof here.
Who remembers there being a river in Route 1? There's grass on both the left and right sides of the route. But according to the cartoon, there's a river here. Sure. Ash jumps in with Pikachu to attempt escape from the Spearow that are chasing him. He manages to see a wild Gyrados, which sure as hell don't exist in Route 1. In fact, these things are seldom seen in the wild at all.
Misty, gym leader of Cerulean City, is fishing for Pokémon in the river. She manages to get a big bite... no, it's not, it's just Ash and Pikachu. 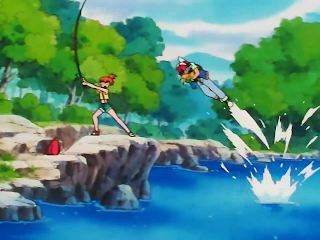 Misty couldn't care less about Ash. She's much more interested and worried about Pikachu and his condition. She scolds Ash, and in the Japanese version of the cartoon she even smacks him in face. The aftermath of that shot, though removed, can be seen in the 4Kids edit.
Misty tells Ash that he must get Pikachu to the nearby Pokémon Center. She doesn't tell him where that is, which is no doubt another guff during the dubbing of the show or in the translation from the Japanese source material.
Ash takes off on Misty's bike, effectively stealing it. He yells, "I'll give it back someday!"
I don't think he ever does, though that's a recurring joke and entirely deliberate on part of the show's writers. I remember there's an episode, maybe after Indigo Plateau or just before, where Ash and Misty return to Viridian City, and she makes reference to the fact that Ash still owes her a bike. I always appreciated that joke.
Ash and Pikachu can't escape the Spearows, and the weather becomes too rainy that Ash can no longer ride the bike anymore. Pikachu is tackled to the ground by the Spearow, Ash goes to save him.
Ash demands that Pikachu gets inside the Poké Ball, so that he is safe from the attacking Spearow.
Pikachu doesn't go inside the Poké Ball.
Ash stands there defending Pikachu, and is attacked by the Spearow. In this moment, Pikachu learns that Ash really does care, and is willing to give his life for the little fella.
Pikachu leaps up behind Ash and over his shoulder, and unleashes a devastating Thunder attack! The Spearows are all defeated, but Ash forgets to capture any of them although they're all weakened.
Misty's bike is ruined. Pikachu is in a critical state. Ash is face down in the dirt.
They wake up, look to the sky, and see a Pokémon that the Pokédex cannot even identify. 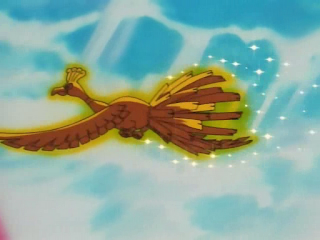 As a kid, I didn't know what this was. It wasn't until Pokémon Gold and Pokémon Silver were released that we finally knew this flying bird is the legendary Ho-Oh. I'd like to think that this Pokémon was invented by the cartoon series, and was later implemented into the games. However, given the popularity of Pokémon and the number of games released in Japan before the cartoon was even aired elsewhere, I would probably say that the Pokémon already existed in concept form or was originally planned for inclusion in one of the games.

"This is just the beginning of the amazing adventures of Ash and Pikachu. Their journey is destined to be packed with non-stop action. Millions of laughs. Heart-pounding perils. And endless excitement. Together, they'll encounter fantastic friends, evil enemies and meet creatures beyond their wildest imagination, and as their story unfolds we'll unlock the magic and mystery of a most wondrous place... The incredible world of Pokémon."

Couldn't have said it better myself, Mr. Narrator. A slow pan upwards as Ash carries Pikachu into Viridian City, and a rainbow is visible overhead.
Credits roll.


For a first episode, "Pokémon I Choose You!" introduces us to the main characters of Ash Ketchum, Pikachu, Professor Oak, Delia Ketchum, Gary Oak, and also Misty.
We're shown firsthand how cruel and yet so wonderful the Pokémon world can be, and we're shown epic scenes with amazing battles. We see a fair number of wild Pokémon, and we truly receive insight into how the cartoon series has adapted the game world to its new format.
This first episode is still an incredible watch, and really gets me pumped up to see what else the world of Pokémon has to offer us. The animation is excellent and the jokes are good enough without getting in the way or appearing too childish.
Next time, "Pokémon Emergency!"
Posted by Unknown at 14:26