It has been a while since my last transmission here on Pikachu Made Me Do It. I wrote to a bunch of gaming journalism websites not expecting much luck and all of them said they were interested in me writing for them. I wasn't expecting that much success to be honest, so I'm now thinking it through really hard.
Also, I just started a Sonic Adventure 2 HD Let's Play on my YouTube channel and I've been to two quizzes over the weekend and had my own shit to deal with on top of all of that. But now I'm back to talk Pokémon.
... 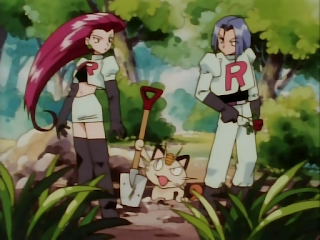 The episode begins, right off the bat, with Team Rocket duo James and Jessie reciting their motto. They're digging a hole with the intention of catching Ash's Pikachu. Team Rocket cover their trap so effectively that they then cannot identify where they had dug the hole.
Of course, they end up falling in their own trap.
This sequence was absolutely, completely necessary. 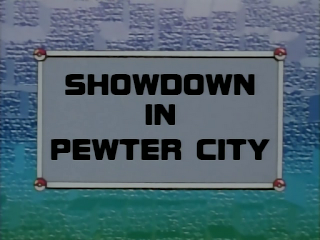 Ash and Misty make their way out of the Viridian Forest. Ash sits upon a large rock and gazes across the horizon of Pewter City. A hobo, sitting nearby, starts complaining about anything and everything. He says something along the lines of Pewter City being the same colour as stone, meant in a derogatory fashion of course.
His name is Flint, and he tells Ash off for sitting on some of his merchandise. Ash says that he's training to become a Pokémon Master, so Flint leads him to the PokéCenter. 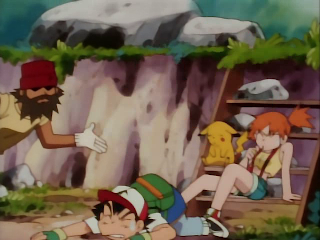 And now, some kind of fourth-wall references to how every Nurse Joy and Officer Jenny look the same! 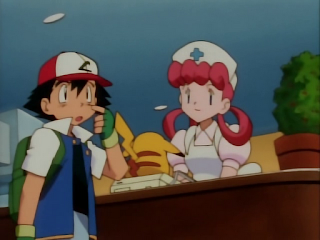 "Nurse Joy?"
"Yes, I'm Nurse Joy."
"But this is Pewter City, not Viridian City..."
How does the animated series explain their resemblance?
Apparently, they're all related! This Nurse Joy is the older sister of the Nurse Joy in Viridian City. Why are they all called Joy? Unless that's their surname.
Ash sees the poster for the Pokémon League Regional Championships.
Something bugs me about this poster, so let's have a look... 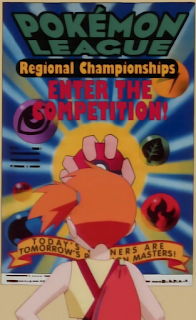 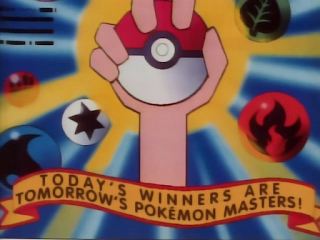 "Normal" Energy? What is with this design? This poster confuses me.

Misty informs Ash that he needs to get badges from each of the region's trainers before he can compete in the Pokémon League Regional Championships.
Flint reappears and laughs at Ash.
"You plan on challenging Brock, the Pewter City gym leader?"
No, of course not, he's going to bake him a cake. Of course he's going to challenge Brock.

Ash and Misty are chowing down somewhere, I presume to be the "cafeteria" at the PokéCenter. (There's a story we're supposed to be following? Axe that! Let's make the PokéCenter the size of an airport and have a cafeteria inside! It'll be rad!)
Misty is concerned that Ash doesn't know what he's getting himself into. Battling a gym leader is different from battling a trainer - gym leaders are extremely ruthless Pokémon trainers who understand how to battle.
Misty offers Ash help, but he declines. Ash should really reconsider that offer seeing as Misty is actually the gym leader of Cerulean City gym, but Ash still doesn't know that. Misty gets the hump, and leaves Ash with the bill.
We've already had more story and plot development in these four minutes (including opening titles) than we had in the whole of the last episode.

Ash's Pikachu, and his other Pokémon—Butterfree and Pidgeotto—have been restored to full health. He immediately sets foot in the Pewter Gym, ready to challenge Brock to a Pokémon battle.
Brock tells Ash that gym battles follow special rules, and that they can only use two Pokémon each.
Last time I checked, gym battles weren't any different from ordinary battles. The only real difference is the leap in difficulty and that the gym leader will actually use Potions or temporary stat boosters in battle whereas trainers do not.
But when did the animated series really follow the rules. When did it have to? It's still great regardless.

Brock berates Ash, telling him that his Pikachu is in its cutest stage, and therefore can't win.
Tough talk, bring the guns big guy. 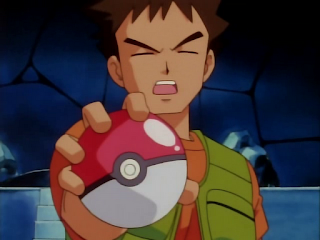 I have to give the artists some credit, Brock does actually look like he does in the games.
Brock releases his first Pokémon. I don't think Ash has realized his mistake just yet, but he orders Pikachu into battle. Type advantages, Ash, didn't you learn anything after the Metapod v. Pidgeotto scenario? 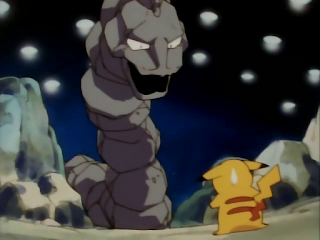 There's no way you can win, Ash. Call it off.
Onix binds Pikachu so tightly that Ash can't return him to the Pokéball. What more, Pikachu's thunder shock is so weak that it cannot even scratch Onix at all.
Ash has no choice but to call the battle off, and admit defeat. So forfeit, Ash, forfeit!

Ash is walking out of the Pewter Gym, when he spots Flint, the hobo from earlier. Flint tells Ash to come with him, so Ash blindly follows the stranger he doesn't know.
Remember, Ash is about 10 and Flint's gotta be in his thirties easily. Again, it's a cartoon, and pointing out things like this is kind of pointless.

It's time for "Let's Add A Backstory To A Character That's Never Brought Up Again" time!
Apparently, according to ol' Flint... 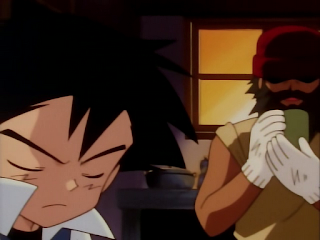 "Let's go have a nose around Brock's house!" 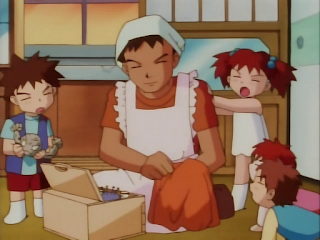 Brock has ten little brothers and sisters who he looks after. Brock could never leave town for regional championships, because who'd look after his siblings? Well I guess he could wait until they're old enough to become Pokémon trainers and then he could just give them the boot like Delia did to Ash.
Brock's mother passed away, stricken with grief, after her "good for nothing" husband ran off to become a Pokémon trainer. Those are Flint's words, not mine.
Ash reckons he might still be able to beat Brock despite having been made to feel guilty by Flint. Hobo Flint reveals that he may know a way to charge up Pikachu.
What could that be, I'm so exci---
WHO'S THAT POKÉMON!? 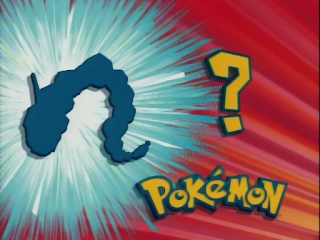 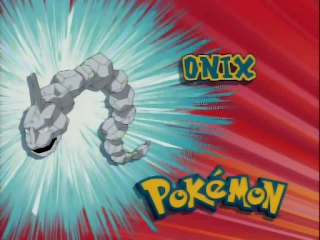 Right, it's Onix, let's carry on now and stop wasting time.
Flint tells Ash that if he hooks Pikachu up to the electro-magnetic waterwheel thingy he could give Pikachu a massive power boost.
Umm, isn't this level of Pokémon cruelty the kind of thing Team Rocket would do? 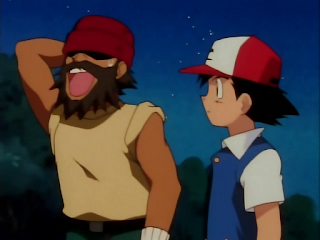 Ash asks Flint how he knows so much about Pokémon.
"Well, I uhh... I just got lucky I guess."
I wonder if there is anybody who hasn't yet worked out that Flint is Brock's father... 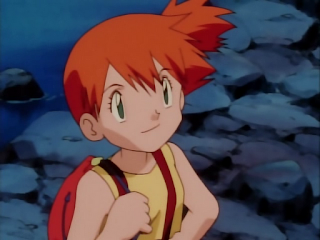 "Wouldn't it be better to just ask for my help instead of going with this crazy power plan of yours?"
Fair point, well made.
Misty only wants to help you because she's fallen in love with you. You could at least have the decency to notice that, Ash. 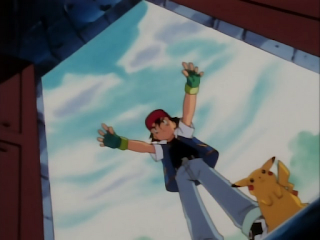 And "Most Bad-Ass Shot Of The Episode" goes to the above, for being a BAD-ASS SHOT.
Pikachu's all powered up now, and Ash thinks he can ignore type advantages again.
It's Geodude against... Pidgeotto!? Really, Ash!? Flying type Pokémon are weak against Rock, you dolt. No, forget it. You'll never be a Pokémon trainer.
"The Pikachu again... I feel sorry for it, being raised by such a weak Pokémon trainer."
I agree.

Wow, so Ash's Pikachu can take out a Geodude with one thunder shock.
The animated series isn't even trying anymore, is it. (Or was it ever trying to begin with?)

Pikachu vs Onix, yada yada. Pikachu sets some of the ceiling pipes on fire by accident, and: 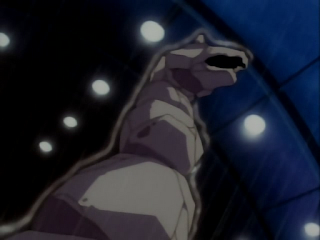 Oh for crying out loud, who puts a water sprinkler in a rock-themed Pokémon Gym?
Ash gets a victory he doesn't even deserve.


Ash can't bring himself to order Pikachu to finish off Onix.
"I'm imagining myself being held back by his brothers and sisters stopping me from defeating the one that they love."
But they actually are holding him back. 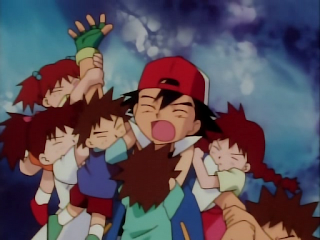 It's not your match, so scram!
Ash can read Brock like an open book. Brock is concerned for the health and wellbeing of all Pokémon, and Ash knows he can play the emotional card against him.
So Ash straight up leaves, refusing to finish the battle.
Which is dumb.
But so dumb that it'll work in the animated series.
Because the animated series is so dumb.
So, so dumb.
Like, the dumbest of all dumb. In the whole dumb world.
Dumb and dusted.

Brock catches up with Ash and tells him that he's won the Pewter City gym badge fair and square. Brock reveals that he cares more about looking after for and caring for Pokémon than making them battle. He would like to become the world's greatest Pokémon Breeder, but is confined to Pewter City, having to look after the ten siblings that the animated series cooked up for him. 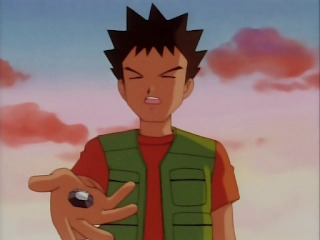 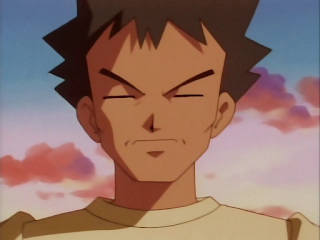 Flint promises to stay and fix his family, allowing Brock to go off on his adventures with Ash and Misty. We end on a few jokes, it's all pretty good and wraps up the episode nicely.
Narrator, hit it!

"And so, with a new friend and ally (and Misty close behind), Ash continues on his quest to become a Pokémon Master!" 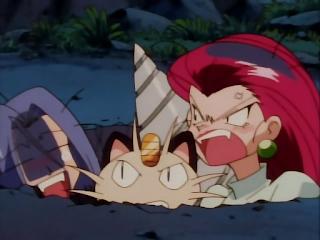 And the episode wouldn't be complete without a finishing goof from Team Rocket duo Jessie & James.
"Buried alive, and trampled... We've hit rock bottom."
Please can we just jump to Season 14 already, to when you guys finally get competent? 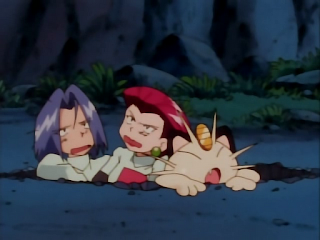 Just how did they survive, without food and water, for a whole two days?
Ugh. Whatever.
I need a shower, this episode made me feel dirty.
Posted by Unknown at 18:30