We have a little recap, and then it's time for... 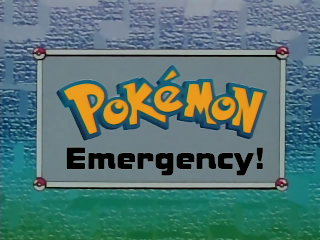 "Pokémon Emergency" is the episode that introduces Officer Jenny, Nurse Joy, James and Jessie of Team Rocket, and their trusty sidekick and "top cat" Meowth. In terms of plot, the episode has a different approach to the first; practically all of the action takes place in Viridian City, though more importantly, just the PokéCenter.

To its credit, the episode has a slightly darker tone to the first, and gives us a false impression that James and Jessie are competent crooks. From this episode onwards, however, they're very rarely menacing. In this episode, their reputation precedes them as they're wanted by the law for stealing Pokémon.

The episode begins as Officer Jenny speaks over the PA system of Viridian City, asking citizens to be on the lookout for "suspicious looking strangers". Just as she begins to repeat the statement, she glances that Ash is carrying Pikachu, and assumes that Ash is trying to steal Pikachu.
Why? I guess she's just on edge, you know.
Ash informs Officer Jenny that Pikachu is most definitely his Pokémon, and that he most definitely isn't a Pokémon thief. Officer Jenny asks him to show her his ID proving he's a trainer, and Ash is left blown aback.
Turns out, though, that a PokéDex acts as trainer ID. I suppose this is the equivalent of the Trainer Badge in the video games, which is your form of ID proving you're a Pokémon Trainer. (And also a handy way of seeing how many badges you've collected and Pokémon you've caught!) 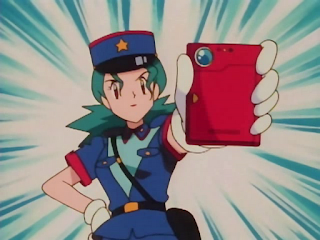 Once Officer Jenny is pleased that Ash isn't one of the Pokémon thieves, she insists upon giving him a lift to the PokéCenter to save him some time. They grab onto her motorcycle, a vehicle not seen in the first generation of Pokémon Games, and Jenny drives off towards the PokéCenter.
They leave Misty behind in the dark smog, who is now in a really bad mood. She's grasping her ruined bicycle, hoisted over her shoulder, and has clearly walked all the way to Viridian City whilst carrying it.
As Misty jets off on foot to catch up with Ash and Officer Jenny, a small fishing hook on a piece of string swoops out of the air and rips a wanted poster off of a nearby noticeboard. The act is very inconspicious, well, it would be if it wasn't for the string originating from a very large hot-air balloon shaped like the head of a Meowth. 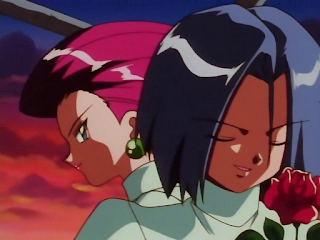 "A wanted poster? How flattering."
"Flattering? This picture makes me look terrible."
"Then you should be happy the photographer captured the real you.
"Exactly."
James and Jessie of Team Rocket make their entrance, alongside their pet (peeve) Meowth. This Meowth is capable of speech (besides its own name, of course) and belongs to their boss, Giovanni, who players of the first generation Pokémon games no doubt remember as the leader of Team Rocket and the final gym leader.
I don't know why this cartoon does it, but the idea of an English speaking Pokémon really concerns me. Isn't the point of the PokéCry in each game that Pokémon as a species make a certain type of noise? The cartoon couldn't have the Pokémon going around making PokéCry sounds, so they made it that Pokémon could only say their name. But now they're going back on that.
Fortunately, we are given an explanation as to how Meowth can speak, but it comes much later on. I remember he taught himself to speak, and it was something stupid like watching ballerinas training how to dance or something.

Ash and Officer Jenny are driving across Viridian City. Now it's nighttime for some reason, and Viridian City is massive compared to its video game counterpart. Also, the PokéCenter itself is shaped like some kind of dome, and does not resemble anything seen in the first generation of Pokémon. And the first episode tried so hard to make it seem like the cartoon is trying.
Jenny swerves the motocycle through the front door of the PokéCenter (but it's an automatic door so it's OK). 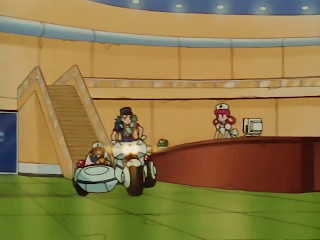 Nurse Joy tries to exert authority over Officer Jenny.
"We have a driveway, you know."
There's no time for that, it's a Pokémon emergency! Nurse Joy spots Ash's Pikachu, and says, "It looks like a Pikachu."

Give this woman a trophy. Some cookies. Some kind of prize. Absolutely incredible deduction, Sherlock. Oh man, she'd be great at guessing "Who's That Pokémon!?".

Ash insists that if there's anything he can do to help, he must help. But Nurse Joy tells him that the only way he can help is to never let his Pokémon battle to a critical state ever again. As a character, on first introductions, Nurse Joy can be quite a bitter woman. This does change, over time.
Officer Jenny finally realizes she left her motorcycle parked at the front desk.
"Next time, use the driveway." Nurse Joy scolds. Nurse Joy then insists that Ash goes to the waiting room, instead of standing around in the lobby growing moss or something.

Ash sits in the waiting room, obviously feeling terrible about himself and worried sick over the health of Pikachu. He decides he'll phone home from the public videophone, he's probably homesick too. (Wouldn't you be?) 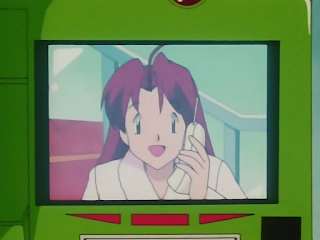 "You're already at Viridian City?" asks Delia, excitedly, "It took your father four days to get there when he started Pokémon training."
Where is Ash's dad? What does he do? Is he dead? What's the purpose of Pokémon training? Why do people train Pokémon instead of working jobs? Why train Pokémon from such an early age? Is there a war on? Are new soldiers secretly drafted by tricking them into Pokémon training? Where is Ash's dad? Where? You can't make reference to him and then pretend he doesn't exist, that's just cold! COLD! Is he on his own Pokémon journey? He could well have been on that journey for a decade! Is Delia happy with having to raise Ash all on her own? Or is that why she seeks extra-curricular activities with Professor Oak?
Ash finishes his phone call with this mother, and spots a large plaque in the lobby, displaying murals of Moltres, Zapdos, Articune and Arcanine. He believes that the flying Pokémon he saw is on the plaque, which it is not. Ho-Oh is the flying Pokémon that he saw.
As he stares intently, the phone of the Viridian City PokéCenter begins to ring. With nobody at the counter, Ash decides to answer it. 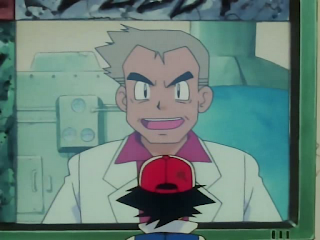 It's Professor Oak! Okido-hakase! He'll give us some good laughs, I just know it.
The phone call begins with Professor Oak, facing the wrong way, because he has the wrong camera enabled. Once he fixes that, he says to Ash that he's just been on the phone with Delia (of course he has) and that apparently Ash is at the PokéCenter in Viridian City.
He asks Ash if it's true that he's there.
Ash points out the stupidity of his question. Professor Oak then goes through it himself, "Of course! I phoned the Pokémon Center in Viridian City, and you were able to answer!"
I guess it's been a slow day, Sam.
Ash says that he's seen the Pokémon on that plaque, but Professor Oak tells him he couldn't have possibly seen it, because trainers have searched their entire lives to see it.
This is getting ridiculous now. How many 40+ aged trainers do you see gadding about the Pokémon world? None.
The phone call ends, and Ash still feels completely dejected. A voice bellows from over his shoulder, "Now I've got you!"
The camera turns to reveal... WHO'S THAT POKÉMON!? 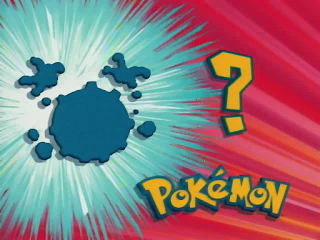 Wow, this one is a little tougher. We haven't actually seen it yet.
Posted by Unknown at 09:49