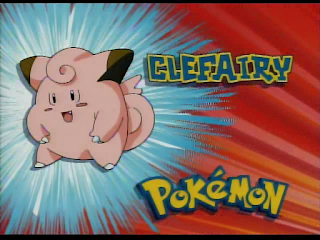 Clefairy is hopping away from Misty and Seymour, scaling a large rock. Knowing of no other alternative course of action, Misty and Seymour follow Clefairy and attempt to scale the rock-face by themselves.

As Clefairy reaches the top, it is approached by Team Rocket's Meowth. Clefairy screams, and Misty looks up, only to get a face full of Clefairy's arse as it falls onto her. This causes Misty and Seymour to fall a few thousand feet to their death.
Well, no, of course it doesn't, because this is a cartoon. They fall into a conveniently placed pool of water. 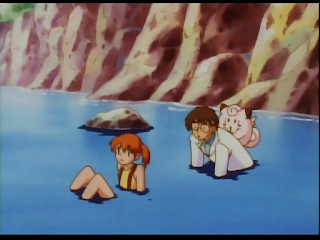 Meowth drops down to the pool and threatens to harm Seymour if he doesn't hand over the Moon Stone that Clefairy is carrying. Misty doesn't take kindly to this, and we see her first battle in the animated series - she's quite apt at battling, wouldn't you know, being the Cerulean City gym leader and everything.

She releases Staryu, and orders him to use a Swift attack. She follows that move up with Water Gun, which inflates Meowth like a balloon. Yes, it was amazing up until now, but they had to ruin it with circus tricks. 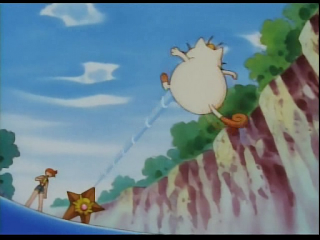 Ash and Brock catch up to see that Misty has taken care of things. 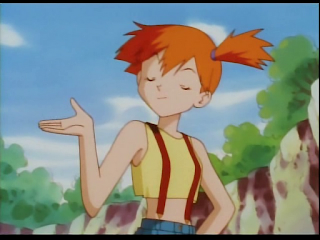 Evening now, and Brock is talking about the Pokémon Food that he has created. Don't worry, it isn't made from real Pokémon... or is it?

He says it's made from his own secret recipe, which could mean anything. Maybe it's made out of the remains of his brothers and sisters. 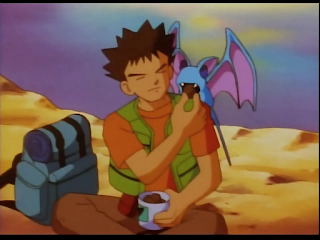 Despite being late at night, everyone follows Clefairy and Pikachu, who lead them to another cave. Inside, the giant Moon Stone is visible on a rock platform. Clefairy adds the final piece of Moon Stone, which causes the rocks to shine brightly. 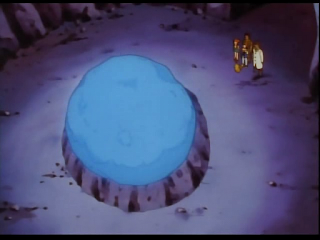 A group of Clefairy appear from somewhere, and start to blab away haplessly. Ash and Pikachu play charades, which is a sight to behold, and we discover that the Clefairy pray to the Moon Stone.
Seymour spouts some poetry about going to Space (I'm pretty sure his head is already up there somewhere) which is Team Rocket's queue to bust in on the scene. 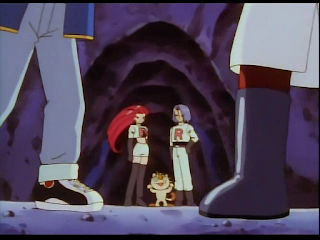 How did Team Rocket find the cave? Did they follow Ash and his group? Or did they just stumble upon it by accident? Maybe the Clefairy were being too loud, or the glowing could be seen from far away, I'm just trying to find any other reason besides two nineteen year-olds spying on two ten year-olds and a fifteen year-old.

Meowth trips Seymour up and this causes him to lose his glasses. Jinkies, he can't see without his glasses! 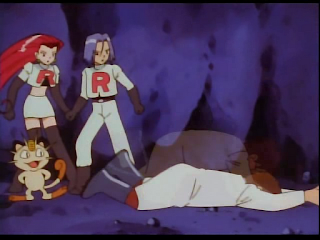 Team Rocket release their Pokémon, etc. etc. let's just get this over with please I'm getting tired here. Brock releases Onix, and Ash orders Pikachu to battle. Pikachu clambers onto Onix, it seems they're best of friends now. I wonder if Onix or Pikachu even so much as remember the fight they had not one whole episode ago. 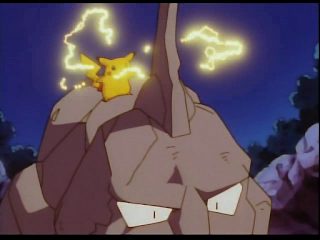 Koffing uses Smokescreen, something I don't know, some stuff happens - Moon Stone's gone, ok? Team Rocket made off with it. Their first time ever showing some actual ingenuity and talent.

Ash and the gang follow them, leaving Seymour behind. The Clefairy hand him his glasses, and Seymour explains to the Clefairy that getting the Moon Stone back should be their job because it's practically their God.

In the Japanese version of the animated series, the Moon Stone is explicitly referred to as a deity and that the Clefairy believe it to be their God. While implied in the dub, they avoid using those exact words.

Team Rocket are racing down the mountain, chuffed with themselves, when Onix comes busting out of the ground and causes them to crash. It's a shame, I kind of wanted them to succeed for once. 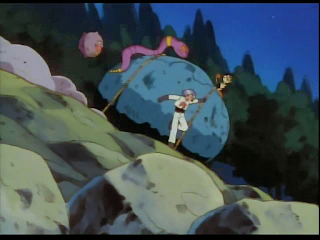 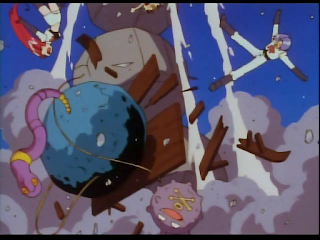 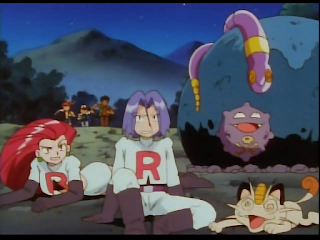 The Clefairy pour out of the resulting chasm, and begin using the Metronome. This causes a large explosion which sends Team Rocket "BLASTING OFF AGAIN!" 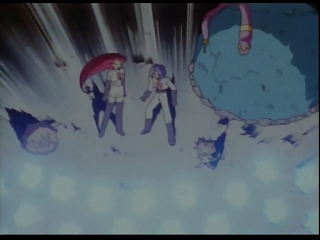 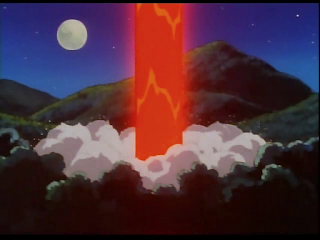 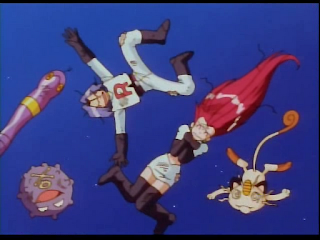 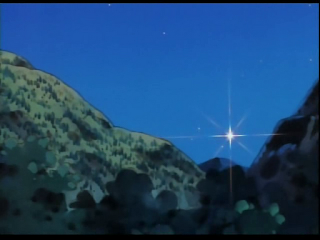 The falling fragements of the Moon Stone from the explosion float down towards the ground, and cause a number of the Clefairy to transform into Clefable. 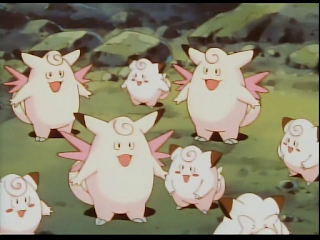 Back in the cave now, the Moon Stone is in its rightful position. Seymour explains that he will now live with the Clefairy, as it has been his life's dream to find the Moon Stone. He claims that he'll one day visit the stars with the Clefairy and Clefable, to which Brock makes the sarcastic remark, "I hope you'll remember to send us a postcard!" 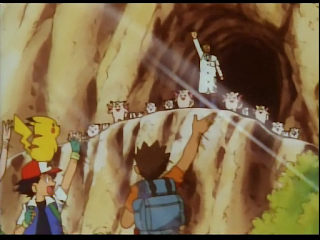 Make sure you look back every couple of steps, just to make sure he isn't following you, okay? I care about you guys, I really do.

And now, one of the most quoted parts of the first season, it's time for the closing of Episode 6. We're on the outskirts of Cerulean City, and there's something coming up that's totally going to ruin Ash's day. In these shots, they've planted little hints that Misty doesn't want to return to Cerulean City; what's her secret history that the animated series cooked up? We'll find out. 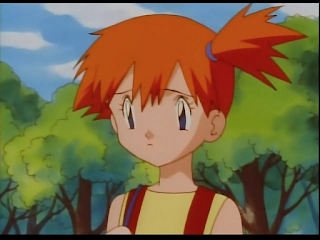 Ash sees that Gary Ketchum has scribbled on the Cerulean City sign: 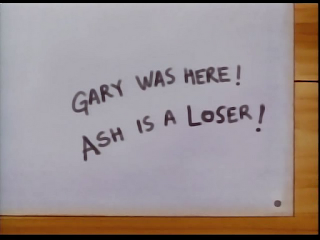 Probably busting several blood vessels in the process, Ash furiously rushes on ahead to Cerulean City. And with that, narrator, give us the closing blurb, post-haste now!

"And so Ash races to catch up with his rival. Is he running towards victory, danger, or disaster? No-one knows for sure, so make sure you're here for the next Pokémon!"

I don't think I even have a choice, I've started this thing now, I've got to see it through.
And we've got the Pokérap on the end, which means the episode must have under-run.

I think I'll get back to playing some Pokémon games in the mean time. Any suggestions?
How about this:

Ah ha! My selling-out knows no limits!
Posted by Unknown at 15:18