Wow, did I say I'd post more often? I've done completely the opposite. It's time for another episode review - Clefairy And The Moon Stone!
Continuing with the loose association between the video games, the animated series is now turning a hand toward Mt. Moon, a place Pokémon 1st and 2nd Generation players should be familiar with. Its winding tunnels and endless supply of Zubat are a memorable beginners trap. I remember spending hours here as a kid getting lost, in reality it's a simple place to navigate with some hindsight and experience.

Ash, Brock and Misty are traversing toward Mt. Moon, and are discussing the name. Apparently, according to Brock, a meteorite crashed into Mt. Moon many years ago, and it has been named the Moon Stone. I cannot even begin to count on how many levels this is incorrect compared to the games, but I'm pretty much bored of doing that now. Misty also says romantic twice in one minute, some of the worst writing yet on the part of the translators. 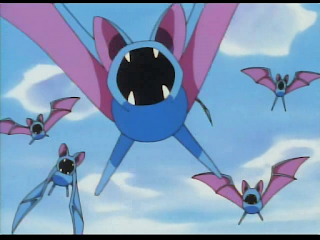 We get our first piece of exposition. It seems a dumb scientist has caused some discomfort to the Zubat horde and they're now giving him what-for. 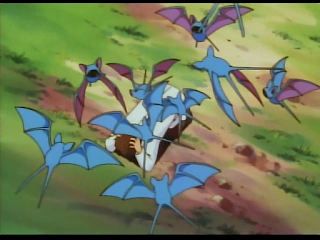 Ash takes this opportunity to analyze the Zubat with his PokéDex, instead of actually helping the poor guy. Misty tells Ash off for wasting time, so he finally gives the scientist guy some assistance. Ash commands Pikachu to perform a Thundershock attack, but then proceeds not to capture any of the weakened Zubat. Ash is pathetic like that. 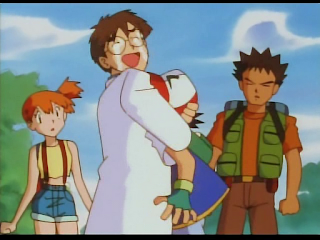 So this scientist tries to smother Ash and Pikachu - the best way, kill them with kindness, they'll never suspect a thing. You can hide the bodies in the river and say "Clefairy Made Me Do It". 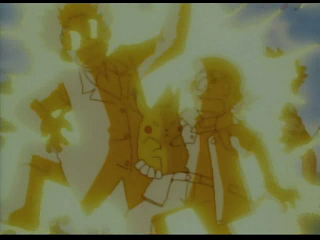 Pikachu zaps the guy to near death. He should have seen that coming, really.

Our "Character of the Day" this time is Seymour. Seymour the Scientist. Really.
He's another invention of the animated series. We've never met a Seymour in the Pokémon franchise. And he certainly didn't recite poetry or make clichéd outdated references to Titanic. 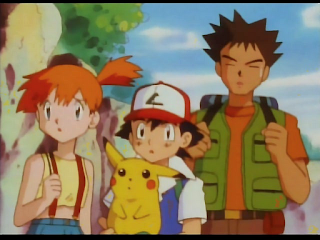 It only lasts for a second, but this reaction tells us everything we needed to know. Ash, Misty and Brock are not only scared of Seymour and his awkward behavior, but also frightened for their very lives. Listen to me, if there's a grown-up who recites poetry, makes references to Titanic, and claims to be a scientist; walk away. Walk away before you end up as one of his experiments.

Ignoring their deep inhibitions towards Seymour, the team wander further into the cave with him. Where they're far away from civilization and no-one is around to bear witness to what happens... Seymour's got these kids where he wants them.

Seymour talks about how somebody has strung lights up in the cave, and it's upsetting the Pokémon inside the cave and making them violent. Wait, so I didn't need to teach a Pokémon how to Flash? Oh for crying out loud--

Seymour then recites more poetry, claiming he's protecting Mt. Moon from attackers who are trying to find the Moon Stone, the legendary meteorite that he believes acted as a "space-ship" that brought Pokémon to Earth from Outer-Space!

KIDS, THE SIGNS ARE HERE. RUN. RUN FOR YOUR LIVES.

Ash is ready to catch a Clefairy that passes by, but Seymour grasps his arm to stop him. Bad touch!

Anyway, stopping Ash from catching Clefairy. Is Seymour a lunatic!? Clefairy and Clefable have a massive move pool, fantastic HP and are rarer than a day where I don't want to kill myself. Add it all together and you've got one of the finest Pokémon that you can catch prior to reaching Cerulean City. You can evolve Clefairy at any time you wish seeing as it uses the Moon Stone to evolve, and Softboiled guarantees health recovery on demand.

Not to mention a move like Metronome has saved me on a number of occasions, sometimes performing a Magnitude 10 in Gold/Silver.

Don't catch a Clefairy? Why not?

The Clefairy wanders off into the distance, and then screams at a loud pitch. The team rush over to see Team Rocket's Meowth taking a fancy to the rock that Clefairy is carrying. Oh, so that must be part of the Moon Stone, do you really think we're so backwards that we didn't already work that out?

Ah, the motto feels nostalgic again. It's only been twenty days since I last heard it. *swoon* 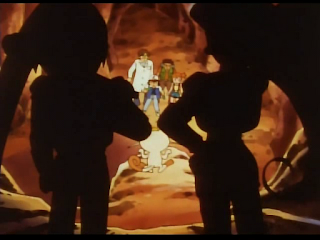 Jessie is holding a Shovel and James is holding a Pickaxe. They're equipped ready to play a bit of Minecraft, it seems. 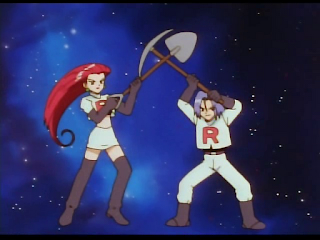 As always, Team Rocket make the mistake of giving away their scheme. They want to use a Moon Stone to power up their Pokémon, which is about as obvious as NIGHT FOLLOWS DAY, DAY FOLLOWS NIGHT. They're the bozos that put the lights up in the cave, and they feel absolutely no remorse for their actions.

This is why, even when they're blundering idiots, I still love Team Rocket.

It's a battle! Jessie releases Ekans and James releases Koffing. Brock releases Zubat and-- wait, Brock has a Zubat? Since when?

--and Ash releases Butterfree. He's non-dairy, wouldn't you know. At the same time, Ash orders Misty to keep an eye on Seymour and Clefairy, and to leg it at the next opportunity.

Ash: "A Zubat!?"
Brock: (smugly) "I captured it just before we entered the cave."

Give these writers a biscuit, they just impressed me a lot there. Artistic license used to its full and a chance to slag off Ash some more, always welcome.

Meowth wanders off of his own accord, presumably to tail Seymour and Misty, though more importantly the Clefairy with the Moon Stone fragment. 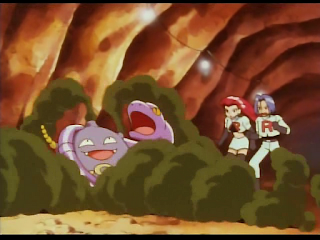 What have I just walked in on, I'm so sorry, I just-- wait a second, this isn't what it looks like, now is it? Zubat performs a Supersonic attack, which causes Ekans and Koffing to fight amongst themselves. It looks like something completely different though.

Butterfree gusts Team Rocket, and their Pokémon, down a hole!And here's our first instance of BLASTING OFF, ladies and gentlemen! 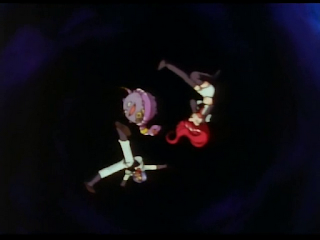 Ash and Brock celebrate, but soon realize that Meowth must have disappeared somewhere. Meanwhile, Clefairy hops away from Misty and Seymour, whatever will happen next--
WHO'S THAT POKÉMON? 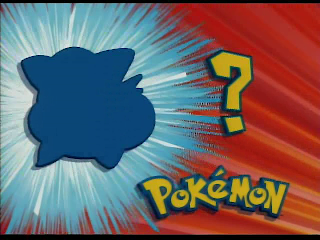 I haven't a clue. It couldn't, no, it can't be the Pokémon that the episode is named after, right!?

I'll be back soon with the second part of the episode. In the mean time, might I recommend a nice fun Pokémon game that you can love and enjoy? No? I'm going to do it anyway because I'm selling out!

Just kidding about the selling out, but here's an advert anyway.